Town Board salutes nonagenerian in turn

Joe Etta, a 95-year-old veteran of some of the toughest campaigns in World War II, last week gave a plaque commemorating his military service to the Philipstown Town Board, who in turn lauded him.

In an impromptu ceremony held downstairs in Town Hall, before the board’s formal monthly meeting Nov. 7, Etta, an ex-Army sergeant, downplayed his role in the war as he donated the plaque, to be publicly displayed in Town Hall.

“I had never been out of Cold Spring in my life and then I went around the world,” he said. Etta served with the “Big Red One,” the 1st Infantry Division, and took part in Allied landings in North Africa in 1942, Sicily in 1943, and Normandy in the D-Day invasion of June 1944. 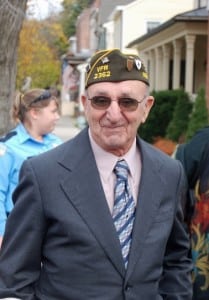 Joe Etta, on the day he received the French Liberty Medal in 2009. (Photo courtesy of Ande Merante)

He recalled that he spent “34 days on the Mediterranean Sea, waiting for President Roosevelt” to give the go-ahead for the 1942 landing. “I went through all that stuff,” he said of his days at war. “We had good times and bad times.” Rather than participating in the intense fighting, “I was in the picking up and everything else,” he claimed. “I wasn’t a hero or anything.”

“They are definitely heroes,” Town Board Member Dave Merandy said of Etta and his fellow soldiers. “I’m glad he’s with us and I’m glad he’s getting this acknowledgement.”

Etta said that after he mustered out in 1945, he hadn’t thought much about his experiences until relatively recently and that Town Board Member Betty Budney “started this whole thing.” In addition to the plaque, created as part of a “wall” of recognition of area veterans, he was honored in 2009 with the French Liberty Medal for his contribution to freeing France from the Nazis.

Joined by his daughter, Maureen, who works for the Philipstown Highway Department, he said Thursday that all the fanfare “is way over my head.” Not certain what to do with the plaque, “I figured it would be nice if I could donate it,” he explained.

Town Board Member Nancy Montgomery said the town is honored by Etta’s gesture and patriotism. “The story of your service is something we in the community will always be grateful for.” Philipstown “is lucky to have men like Joe Etta in our ranks today and every day,” she said.

The D-Day landings provided the supreme test. In five days, the division drove inland and cleared a beachhead for supplies and troops. Driving eastward across France against fanatical resistance, the soldiers of the 1st Infantry Division spent nearly six months in continuous action with the enemy.”

The division is based at Fort Riley, in Kansas.