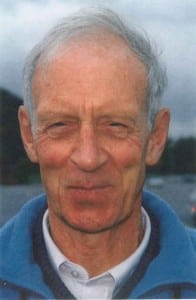 Mr. Evarts served in the U.S. Army with the 94th Infantry Division, 1943-45, in France and Germany. He was wounded in the Battle of the Bulge and was awarded the Croix de Guerre avec Palme for his service with the Forces Françaises de l’Intérieur, the formal name for the Resistance fighters in France.

Mr. Evarts joined the law firm Winthrop, Stimson, Putnam, and Roberts in 1952. Specializing in general corporate work, he served as managing partner for more than 20 years. He became of counsel to the firm in 1997.

Along with his family and his professional career, his major interests were his church, his community and the environment. Descended from a long line of legal and church leaders, Mr. Evarts served on the vestry of St. Philip’s Church in Garrison. He was chairman of the New York Community Trust, and served on the boards of the United Hospital Fund, and the Clark Foundation.

He also served on a number of environmental boards including the Trust for Public Land, Scenic Hudson, the National Audubon Society, the Nature Conservancy of New York, and the Hudson Highlands Land Trust. He was an enthusiastic mountaineer, hockey player, rower, sailor, and backpacker in the mountains of the West. He took great pleasure in music, especially in playing classical piano.

We celebrate the life of this good man on Saturday, Nov. 23, at 2 p.m. at St. Philip’s Church, Garrison.