Homes must be “dressed and ready” by the first weekend in December, and local homeowners are persuaded to open their festive homes up to hundreds of visitors for the annual Cold Spring By Candlelight tour. Rand Bridget Otten, director of development at PARC, the Brewster-based nonprofit which provides advocacy and programming for children and adults with developmental disabilities, and which benefits from the event, does much of the persuading and called it a tough task.

“It’s never easy convincing homeowners,” Otten said. “We’re asking people to get their homes decorated three weeks before Christmas, and to open their doors to the public for five hours in a meet and greet. We know it’s not easy. Yet each year, there are homeowners who volunteer again, and often it is because the more they learn about PARC, the more they wish to support it. This year’s tour features four returning homes and two homes new to the event,” Otten said. “We’re thrilled to welcome two new homes to the tour and truly appreciate the generosity shown to us by the returning homeowners. Year after year, they show a remarkable holiday spirit and help us to raise tens of thousands of dollars to support people with disabilities.” 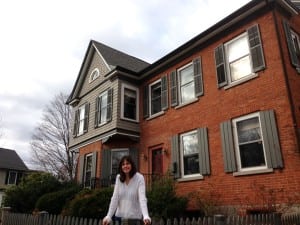 Jennifer Young, pictured in front of her home, which will be featured for the third time as part of the Cold Spring By Candlelight tour. (Photo courtesy of J. Young)

This year, homeowners include Cathy Carnevale, whose historic Fair Street home will be back for the second time, and Jennifer Young and Cathy Polera, whose circa 1860 home on Main Street “just a couple of doors into Nelsonville,” will return for a third go-round. Young said she had always been aware of PARC, and the work they do, from earlier work she did with “foster care kids, many of whom had special needs.”

Young didn’t initiate her participation, originally — she recalls that her home may have been suggested to Otten four or five years ago by Caryn Cannova, of the store Kismet. “Rand made it sound like a lot of fun,” she says. The first year she was surprised by the large crowds. “There were so many people I literally couldn’t walk through my living room, it’s almost like a convention, but the PARC volunteers really keep it flowing.”

Like other hosts, Polera and Young will be on hand to answer questions about their home’s history. Although renovated, the house retains much of its original trim, molding and bannisters, as well as a fireplace with the original tin plating in the back.” Young says visitors hail from all over, with many from the city but also quite a few locals.

“This being a small town, and having lived here for 13 or 14 years, I always feel like I know everyone, but it always surprises me how many people I meet on the tour whom I’ve never met before, ” said Young. She and her business and creative partner January Akselrad, runs a company called See The Wish, which creates classroom plays and musicals that teach curricula and character. As she has before, she will offer signed copies of her childrens’ books for sale, with profits going to PARC. 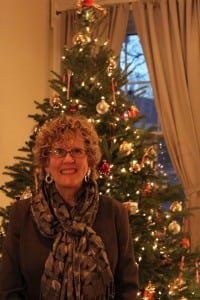 PARC’s only stipulations are that homes be located within the Villages of Cold Spring or Nelsonville and must be “dressed and ready” by the first weekend in December. Some people open up their entire home, others opt for first floor only. The homes needn’t be “fancy estates.”

According to Otten, “really it’s about the spirit, and how the owners embrace the spirit.” Cold Spring By Candlelight is an afternoon-long event. Historic homes and sites are open to the ticket-buying public; festivities include holiday caroling, discounts at local stores and restaurants, visits with Old St. Nick, and more.

Also returning is Cathy Carnevale, whose 1840 home has only changed ownership three times since being built and occupied by Phoebe and Sylvanus Warren. In a brief history, Carnevale notes: “The Warren family lived here until about 1890, and then the Wood family was here for multiple generations until I bought it … . The Warrens had 12 children, of whom six survived; their graves are in the cemetery behind Haldane. John Warren ran the Bird and Bottle Inn [then called Warren’s Tavern] during the days when the Old Albany Post Road was the main route. There were 12 fireplaces, of which two remain.

“The house was home to Gouverneur Kemble Warren (named after Gouverneur Kemble) who was a major general in the Civil War. The Wood family left an old picture of him down in the basement which I’ve had framed and it now hangs over the fireplace.” Also, Carnevale stated: “Gouverneur Kemble’s sister, Emily Warren Roebling, lived here and there’s a plaque on the side of the house.”

Carnevale says people are always eager to see what the house looked like before renovations and she tries to have material out showing its origins. “The visitors are curious about the house and want to talk about it,” she says, “and I’m more than happy to show it and meet people, but this time, most of all, I’m doing it totally for PARC now that I know more about them — it’s totally for the charity.”

Cold Spring By Candlelight is PARC’s major fundraiser, with Otten noting, “It’s been a powerful force for my organization.” Among the many services PARC provides are: clinical services to those with developmental disabilities; group homes and supported apartments; vocational skill training and job coaching; day “habilitation” programming including field trips and workshops; an extensive network of community residences and a traumatic brain injury network, which assists with returning those injured back to work and to school.