There’s more than a bit of confusion and misinformation out there about wild turkeys, all seven million of them. First of all, they are not the birds to be the centerpiece of Thanksgiving action next week (those are domesticated turkeys, raised and fed to grow much larger.) And second, yes, they can fly. Both of these wild turkey facts were imparted at last Sunday’s “Talking Turkey” presentation by the Hudson Highlands Nature Museum’s Carl Heitmuller in the final of three wildlife-themed talks co-sponsored by the Hudson Highlands Land Trust at Hubbard Lodge.

Environmental Educator Carl Heitmuller talks up turkey tailfeathers and explains why turkeys flare their tails. (Photo by A. Rooney)

With a lifespan of three to five years, these large birds, ranging in weight from five to 20 pounds sport different plumage depending on gender. The adult males, called toms or gobblers, have bronzed iridescent feathers with black-tipped breast feathers. The males are bigger than the females, more dull in color, with light brown breast feather tips. Heitmuller said the likely reason was the ability of the females to camouflage when sitting on their nests, guarding eggs, whereas the males “call and show off, saying, basically, ‘I’m gorgeous’ during mating season.”

The heads of males change colors, becoming blue when excited, red when fighting. The toms also sport sharp spurs on their legs for fighting and protection. They jump in the air, sometimes reaching a height as high as a human’s face and jab their legs, so “Don’t mess with a tom,” Heitmuller advised. The females, on the other hand, have grey heads with a pinkish wattle (the fleshy skin on the neck) and snood (the mass over their beak.) All males and about 10 to 20 percent of females have what are called beards, which are modified feathers growing out from their chests. It has not been completely determined what these beards are for, with some thinking it is for identification, while others say it is for breeding.

The turkey “strut” occurs during the spring breeding season, which is when toms display all their feathers and fight over the rights to mate and to defend their territory. Toms “gobble” during mating season to communicate with a “harem;” their calls can be heard a mile away. A turkey’s nest is a shallow depression in the ground. Hens lay a clutch of 10 to 14 eggs, usually at a rate of one per day. The eggs are incubated for at least 28 days, and, interestingly, despite having been laid at different times, all hatch with 24 hours of each other. 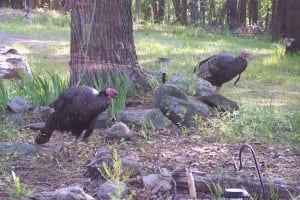 A wild turkey makes its way through a Philipstown yard. (Photo by Lynn Rogoff ©)

What appears to happen, says Heitmuller, is a case of what if: “If one is born first it will be ‘I’m born first and I’ll beat you up’ and then few would survive. What happens is that the other eggs feel the heartbeat and then all of them adjust their development to slow down or catch up to each other so that they all come out at the same time.” The hatching occurs only in spring because that is when all the best food sources are out.

“Baby turkeys are called poults and hatch with their eyes open, and are covered with fluffy down. They must be ready to follow their mother out of the nest within 24 hours of hatching. Until they are able to fly, their mother gathers them under her wings at night in a secluded spot on the ground. Usually the poults can fly within a week. Hens use many different vocalizations to alert the poults to imminent danger. They have different sounds, which let gobblers determine their location.

Heitmuller brought along a wild turkey “call” instrument upon which he demonstrated the wide variety of sounds these birds produce. The juvenile males are called jakes, and juvenile females are jennies and generally out of 14 young, only two to four make it to adulthood. The tom is not involved in raising the brood.

Wild turkeys are omnivorous foragers. They search for food on the ground and also climb shrubs to obtain more. They eat acorns, nuts, seeds, berries as well as grasses and insects. Internally the turkey’s gizzard, a second stomach chamber, is where digested food is ground up. Filled with small rocks, which are picked up along with food sources when the turkey pecks, the gizzard grinds these particles against the seeds, breaking them down. This is necessary, as turkeys have no teeth. Wild turkeys have keen eyesight and see in color. They have excellent daytime vision and can see in a 270-degree span. Their night vision is poor, which limits foraging to daytime hours. They have no sense of smell.

The main predators of wild turkeys are coyotes, foxes, bobcats and, in particular, owls. Black rat snakes and corn snakes eat poults, and raccoons eat turkey eggs. Heitmuller theorizes that this may explain why the wild turkey population has radically increased in recent years:  the raccoon population is declining rapidly, due to the rabies virus, which is widespread in raccoons. Since the raccoons predate the turkey eggs and there are fewer of them, more eggs are surviving and hatching.

In closing out the presentation, Heitmuller quoted from a letter Ben Franklin wrote to his daughter, in 1784, in defense of wild turkeys being named the “National Bird” of the United States; here is an excerpt:

“For my own part I wish the Bald Eagle had not been chosen the Representative of our Country. He is a Bird of bad moral Character. He does not get his Living honestly. You may have seen him perched on some dead Tree near the River, where, too lazy to fish for himself, he watches the Labour of the Fishing Hawk; and when that diligent Bird has at length taken a Fish, and is bearing it to his Nest for the Support of his Mate and young Ones, the Bald Eagle pursues him and takes it from him …

“I am on this account not displeased that the Figure is not known as a Bald Eagle, but looks more like a Turkey. For the Truth the Turkey is in Comparison a much more respectable Bird, and withal a true original Native of America … He is besides, though a little vain & silly, a Bird of Courage, and would not hesitate to attack a Grenadier of the British Guards who should presume to invade his Farm Yard with a red Coat on.”