This is a Thanksgiving tale of Brussels sprouts, boyfriends, and taxis, and why the three are forever linked in my brain.

Once upon a time, I had a boyfriend who was so bad…

How bad was he, you ask?

He was so bad that a few years after our (mercifully brief) relationship ended, he published a memoir about his badness, called something like Jerk: Confessions of a Toxic Scoundrel. He was proud of his depravity. 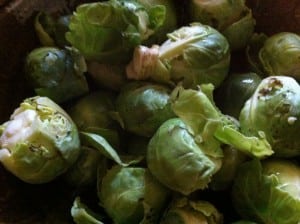 But no human being is pure dross; everyone has some good elements mixed in, and chief among this fellow’s assets was a huge apartment with a terrific kitchen. He also happened to be blessed with indifference when it came to sharing it.

Now, as luck would have it, we were dating around Thanksgiving-time, and, as the holiday approached, he announced that he was going home to celebrate.

So I asked the obvious question: “Can I use your apartment while you’re gone?” I wanted to hold a Thanksgiving dinner there.

I rang up my friend Anne and asked her to co-host with me. She is a stellar cook and one of my all-time favorite people to share a kitchen with. We invited a bunch of people and planned a huge feast.

(Arguably, I was not the best girlfriend, either.)

At that time, giant stems of Brussels sprouts were new at the greenmarket. They looked so striking – like medieval weapons – that even Brussels-sprout opponents like me were drawn to them. And so Anne and I optimistically included this vegetable on our menu, hoping to come up with a worthwhile role for it. 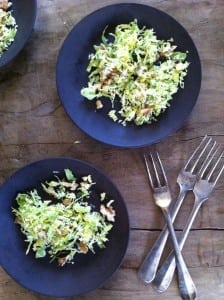 Which we did – though not in time for dinner. Indeed, when the doorbell rang at 5, the Brussels sprouts were still attached to the stalk.

No matter. None of the guests had brought flowers because they all brought wine, so Anne propped the sprouts-pillar in a large vase and declared it our centerpiece.

The feast was a great success; no one wanted to leave. As the night wore on and the wine bottles emptied, people began breaking the sprouts off the stalk and rolling them across the table. Around midnight, snow started falling and we all went to the windows to watch. Someone brought along a handful of Brussels sprouts, opened a window, and pitched one at a passing taxi. Someone else followed suit. Before long we were engaged in a heated sprout-throwing contest. It didn’t end until the street was peppered with small green crucifers.

I never told the boyfriend what took place in his apartment that night. Upon his return, he broke up with me – he had met a younger girl. I was 29 at the time, ergo not so very geriatric that I couldn’t recover quickly. But for many years thereafter, I could not forget that night. Because every time I saw a Brussels sprout, I ached for a taxi to pitch it at.

Friends tried to help me get over my obsession. They urged me to roast Brussels sprouts with bacon and balsamic, or toss them with chestnuts. They prescribed them puréed and kimchi’d. I tried it all, and it was all fine. But I could not shake the feeling that the Brussels sprout had found its highest and best purpose as a projectile.

Then one day, about five years ago, I tasted a raw salad of shredded Brussels sprouts tossed with pecorino cheese and toasted walnuts. It rocked my world. The combination was – is – so good that I have used it many times since to convert Brussels sprout atheists into believers. It always works.

These days, when I encounter one of the little green nuggets, I don’t even think about taxis. Sure, I may toss it up in my hand a few times, but then I set it right down on the counter and begin to shred.

The by-now classic version of this, with pecorino and walnuts, is outstanding; it is served in numerous bistros in New York City (I first encountered the recipe in Gourmet). I’ve played around with a few variations, a few of which are included as options here.

salt* and pepper to taste

One thought on “Mouths to Feed: Sprouting Mischief”