Dr. Eric Richter, who has taught English and dramatic literature at Haldane High School for decades, began including Our Town as a class text about seven years ago. “What I like about it,” he says, “is the characters are characters they can relate to.”

Richter had been gently urging Haldane Drama Director Martha Mechalakos to consider Our Town for the fall drama production for a few years, and this year, the 75th anniversary of the original production, she decided to challenge students used to appearing in lighter fare, and guide them through Thornton Wilder’s theatrical meditation on not just small-town life, but life itself. By all accounts the students  — so many eager to appear in it that during the auditions Mechalakos decided to double-cast each of the 20-plus roles — have embraced the play, which they will present on Dec. 6 and 7, at Haldane.

Mechalakos began the rehearsal period by gathering the cast together to talk about the play and their response to its content. Divided into three acts, the play, alternately (and sometimes concurrently) comedic and reflective, ultimately grapples with questions about eternity and whether human beings are capable of fully appreciating the day-to-day moments, which collectively equal one’s life. Mechalakos insisted that each cast member read the whole play, advising them “there is information about your character not necessarily in the scenes you are in.” She also urges them to “find out what all the words mean, and if it says heliotrope or burdock, know what those plants look like and how they smell.”

When Richter has taught the play in his drama class (in which dramatic literature, not acting, is studied), there are always limitations of time, which preclude a full acting out of the play during class time. 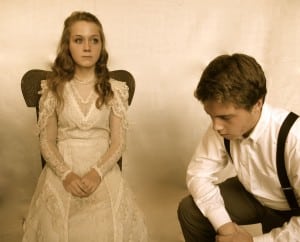 “I do ask students on a voluntary basis, from time to time, to act out roles, as I find that giving plays a sense of performance lends itself more readily to an appreciation of them,” Richter said. He says that although Our Town is known as a very American play, it also “has that universal quality of Greek tragedy.”

He always asks students to reflect on how much Cold Spring is like Grover’s Corners, the fictitious small New Hampshire town in which the play is set. “I talk about the history of it, how ‘Polish Town’ [in the play] is described as “across the tracks, in the poor area of town,” and how Cold Spring’s Italian immigrant population of the early 1900s lived in a similarly demarcated area. We talk about how Cold Spring was very much a Protestant community prior to the 1900s and how people forget how there was a real division between Nelsonville and Cold Spring … . There are so many good parallels, for instance there was a drugstore on Main Street with a soda fountain in it [as there is in the play] — there are just so many great hooks for the students.”

Along with its charming scenes of the awkward stirrings of young love and its depictions of the warm bonds between long-married couples, there is a darker undertone to the play, touched upon throughout, but especially in the last act. “We’ve talked about the darker layers underneath the town,” says Mechalakos, “as well as all the foreshadowing.” Richter calls the first two acts “Norman Rockwell, but Wilder really sets you up in those acts — he manipulates you so when you get to Act Three it has more impact.”

Both Mechalakos and Richter take umbrage at those who have called Our Town sentimental. “There’s no way it’s sentimental,” says Mechalakos, with Richter adding, “It’s completely non-judgmental, too.  There are no villains. Like Shakespeare, Wilder makes everyone human; there’s a gentleness to it.” 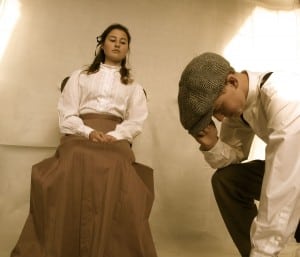 As for the play’s other frequent categorization, that it’s “so sad,” Mechalakos said she advised the cast to look at it differently and to reflect upon what it ultimately asks: “Most people are in a hurry, especially young people. The older you get, the more you appreciate life. Don’t think of it as sad, instead think of it as an opportunity, and think of the afterlife [which the play addresses] as a positive thing, something that goes on and on.”

With no props and little scenery or other trappings to help actors get into character, they were feeling their way through, not yet “there” three-quarters of the way through rehearsal period. “Your average high school actor’s process is such that it takes them awhile. They won’t inhabit until pretty late in the process. You toss things out and let them assimilate it.”

The cast benefited from a field trip to see the lauded New Jersey Shakespeare Festival production of Our Town, which just happened to feature professional actor Malachy Cleary, whose son Luke will be performing in the Haldane production (in a different role.) Before the trip Mechalakos was hoping that the students would take in what she had been trying to communicate to them during rehearsals: “How to give the words space, let them evolve in your head.” 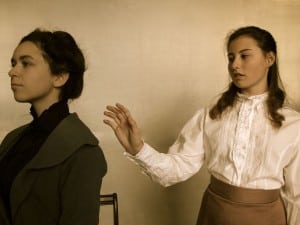 The students enjoyed seeing the production and participating in a talk-back afterwards. They were full of opinions on the direction and acting, with some finding illumination in interpreting scenes or characters and others rejecting the choices made in the other production, feeling conviction in their own take on things.

“I think they’re working hard, harder than they have in other plays, because they’re finding it rewarding,” says Mechalakos, adding, “I think our audience will as well.”

Neither an indictment of small towns, nor a valentine to them, Our Town, one of the most widely produced plays in the world, will play in this town at 7 p.m. on Friday and Saturday, Dec. 6 and 7, in the Haldane auditorium. Tickets, which cost $12 for adults, $5 for seniors and students, will be available at the door.

See the additional story on Our Town here.