For Richard Shea the loss of a good friend

From local to national levels, public officials reacted to Sunday’s Metro-North fatal train derailment with personal sorrow and, in some cases, calls for targeted government involvement in issues raised by the disaster.

Coming at the close of the extended Thanksgiving-day weekend, the accident on Metro-North’s Hudson Line killed four riders, including Philipstown’s Jim Lovell, and injured more than 60 others. 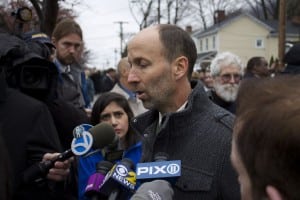 Philipstown Supervisor Richard Shea sharing a few thoughts with the media on the passing of his friend Jim Lovell following the burial mass on Dec.6. (Photo by K.E. Foley)

For Philipstown Supervisor Richard Shea, the loss of Lovell hit very close to home – and hard. At more of a distance, those serving in Albany, Washington, and Carmel expressed sadness and suggested ways government might help either prevent future disasters or cope with those that occur.

Like many in Philipstown stunned by news of the accident, Shea at times spoke in strained, wistful tones as, in a phone conversation Monday afternoon, he remembered Lovell. “Everyone’s heart-broken,” he said. “It’s hard to comprehend what happened.”

Lovell’s wife, Nancy Montgomery, a Town Board member, serves as deputy Philipstown supervisor and works closely with Shea, and both families live in the North Highlands section of Philipstown. In the wake of the tragedy, the Town Board cancelled two meetings this week.

“Our families are close,” Shea said. “Jim was a good friend of mine. He was a good man. It’s hard to imagine he’s gone. I just feel awful about the whole thing, devastated. He was one of the great ones. I’ve known him since I was a little kid.” They have sons the same age and Shea said his family and Lovell and his had toured the historic Weir art exhibit at Boscobel recently, before it closed.

Shea described the occasion as a reminder that in life “you don’t take the opportunities you should and you don’t really do what you should be doing – taking time out for your family and friends. It was fortunate that I had that opportunity last week.”

He and Lovell often talked, and “he had this really calming influence on me personally; he was a great sounding board, a great listener,” Shea added.

Shea cited Lovell’s strong commitment to his family – sons Finn, Jack, and Hudson, whose mother is Montgomery, and grown-up daughter Brooke. “He was very proud of his boys and his daughter” and was “this great father,” Shea said. At Lake Valhalla, near their house, “Jim was like one of the boys – doing back-flips off the high diving board, teaching them to fish. He was full of life. That’s what makes it all the more shocking.”

Shea also recalled that Lovell was professionally involved in music and sound production and related fields and for a while had his own company, Bull Hill Music, that – among other contributions – assisted with a major fund-raising concert for the Little Stony Point Citizens Association some years ago.

Metro-North crews are working around the clock to rebuild 800 feet of track that were damaged by Sunday’s derailment.
(Photo by MTA)

Along with music, Lovell was deeply interested in history, Shea said, and pursued research in New York City libraries and at West Point on local military history.

The supervisor also mentioned the outpouring of reaction in Philipstown to Lovell’s death and the concern for his family. “It’s nice to see there’s so much support [for them]. I think they need to know that anything they need from the town or their friends they’re going to get. The community is rallying around the family, and that’s as it should be.”

Shea had a far different perspective on members of the national news media, who, he said, swarmed around the family home Sunday after the tragedy. “That’s a bad bunch. They were just up there at Jim’s house, harassing the family” and filming. “I know it’s a news story, but there are boundaries that should not be crossed.”

Other officials call for action

Philipstown’s representatives in Albany and Washington referred on Monday to the victims and their families as well as the importance of maintaining safe train transportation.

“My thoughts and condolences are with Nancy Montgomery and Jim Lovell’s entire family, as well as all those affected by this tragedy,” New York State Sen. Terry Gipson said in a news statement. “I am fortunate to have known Jim, and his passing is a great loss to the Philipstown community, Putnam County and the entire Hudson Valley region. He shall be missed.” Gipson noted that residents use Metro-North on a daily basis. “We need to focus on discovering answers as to how this happened, and more importantly, how we prevent any reoccurrence of this heartbreaking accident,” he said.

Assemblywoman Sandy Galef observed that most of the stops on the train line are in her Assembly district. “The tragic train derailment that took place yesterday has left all of us reeling. My heart goes out to the victims and their families of this horrible accident,” she said. “Unfortunately, I am sure that in addition to the two lives lost in my district, the names of others injured will soon be reported who are our neighbors and friends as well.”

Crews work to fix the tracks after Sunday’s derailment. (Photo by MTA)

She told constituents that she is “determined to ensure New York supports any and all efforts to fix and improve our rails and the systems that run them, so all that utilize the railway as a critical and valuable resource can feel safe and confident when they do so. I will be tracking the accident investigation to determine how improvements can best be made.” Galef added that “if anyone should need any help that my office may be able to expedite as a result of the accident, I encourage them to call me at 914-941-1111.”

The area’s member of the U.S. House of Representatives also weighed in. “My heart aches for the victims and their families – we owe them answers as soon as possible,” said Rep. Sean Patrick Maloney, who lives just outside the village of Cold Spring. “Metro-North is an integral part of life in the Hudson Valley, and I want to ensure that the tens of thousands of commuters affected are up to date on this tragic situation, know that Metro-North is safe, and understand what issues may lie ahead.”

His office announced a “telephone town hall” question-and-answer session on Tuesday evening, Dec. 3, at which he planned to provide an update on the derailment as well as to respond to constituents’ inquiries on other topics. Maloney also toured the accident site with Sen. Charles Schumer and National Transportation Safety Board officials and Tuesday morning announced proposed legislation to assist commuter train lines like Metro-North to fund, through federal loans and guarantees, installation of updated train control systems.

On a Facebook posting Monday afternoon, Sen. Kirsten Gillibrand expressed similar concerns. “In the wake of yesterday’s tragic Metro-North train derailment, I’ve urged the Federal Railroad Administration to conduct a thorough evaluation of all MTA commuter trains and to take steps to improve passenger safety,” the senator declared. “My thoughts and prayers go out to the loved ones of those who were killed in yesterday’s tragedy and I wish all those who were injured a swift recovery. We owe it to New Yorkers and all passengers on the MTA trains to do everything we can to make sure what happened yesterday never happens again.”

At the county level, within hours of the train crash Putnam County Executive MaryEllen Odell and other county officials set up a temporary shuttle to link Cold Spring and Garrison Hudson Line riders to an alternate Metro-North train line.

She also asked the Mid-Hudson Regional Transportation Council, which she co-chairs, to look at governmental responses to disasters like the derailment. “We want to review how, after the incident took place, the communication process worked and how we can improve upon it,” she said.

Odell added Tuesday that county residents’ thoughts and prayers remain with Lovell’s family and other families of those who lost their lives, as well as with injured passengers. “To open the holiday season with a tragedy like this is certainly a reality check for all of us. But the Putnam County family will always do what we do – and that’s ‘to be there’ with them and to support them in any way we can.”