‘My father was not a victim’

Tragedy flowed up river last Sunday (Dec.1) with news of an early morning train wreck that killed four people and left 67 injured. In its wake, a Philipstown family mourned the loss of its husband and father. And an entire town reacted with shock and sorrow over the sudden and permanent absence of a friend and neighbor. 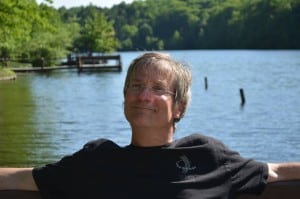 Jim Lovell, 58, died in the derailment of the southbound Metro-North Railroad train carrying him to a freelance work assignment for the NBC television network involving the Rockefeller Center Christmas tree. Lovell boarded the train at 6:20 a.m. after saying goodbye to his wife, his companion of 20 years, Nancy Montgomery.

The only passenger at the Cold Spring station, he died when the train, running well above the speed limit, jumped the rails after a desperate braking attempt approximately one hour later. The engineer reportedly had briefly dozed at the controls as his train rounded a sharp bend in the tracks. A safety feature that might have alerted him and/or stopped the train apparently only works when the diesel engine is pulling the train northbound, not when it is pushing southbound, according to a report in The New York Times.

“My dad was not a victim. I don’t want him to be known as a victim,” said 17-year-old Finn Lovell in an interview with CNN. “Jim Lovell was so much more. He was a loving father, a great Dad, a best friend, an uncle, a great co-worker, always had a smile on his face. He never had anything bad to say about anyone. One of the best people you could have ever met. I am so proud and blessed to say that I could have called him my father.”

Aside from Finn, Lovell had two other sons, Jack, 15, and Hudson, 12. He is also survived by a daughter, Brooke, from his first marriage. (See obituary.)

The sudden, almost inexplicable passing of Lovell — a popular, genial, always helpful presence in many civic, cultural and political activities — created a dark and painful vacuum in the usually placid and comparatively trouble-free community. Across the social media landscape and in anguished personal encounters in church pews, classrooms, and supermarket aisles, as well as on bar stools, yoga mats and Main Street sidewalks, townspeople grappled with the awkward choking language of grief. 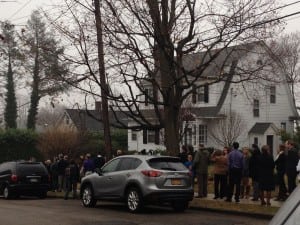 A long line of friends gathers outside the Clinton Funeral Home in Cold Spring Thursday afternoon.(Photo by Michele Rubin)

“Jim Lovell was a dedicated father, a caring husband, and a loyal friend. He had a passion for his work in the media and for the friendships he made and cherished. His spirit and sense of community can never be replaced,” said Nancy Montgomery in a statement. Montgomery, also an active community presence, is on the Philipstown Town Board.

Perhaps because Lovell and Montgomery shared deeply rooted relationships nurtured by volunteerism, love for the land, passion for history, and openness to new ideas among people born and raised in the town as well as those in the more recent influx of families from elsewhere, the community reaction has proved equally heart rendering and heart warming.

“Jim was interested in what everyone was doing. He was pure goodness. He lived that, he showed that and gave it to his boys every single day,” said Montgomery.

Many people were eager to do something to harness the intense but potentially deflating energy such an event can generate and transform it into a tangible, productive gesture. An online donation site set up by the organizers to raise $15,000 to cover immediate expenses will likely result in an amount many times that, an extraordinary result anywhere but especially for a small town. Others have started a Christmas gift drive and a cooking circle to provide meals, and planning for a tribute concert in 2014 is underway.

“We would like to express our thanks for the overwhelming outpouring of love and support from our friends, our family, and our hometown. You have been present for us so often during our lives, and especially now. We are grateful. Jim loved so many, and so many loved him,” Montgomery said. 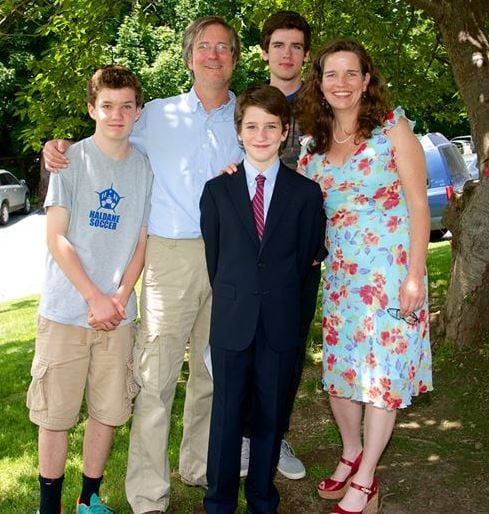 Jim Lovell with his family

Many locals, of course, recalled Lovell directly from their friendship and mutual involvement in school, theater and other social activities, such as helping local seniors. A few achingly summoned reminiscences for The Paper.

“Jimmy is one of the nicest people I have ever known. When we would call him to ask him to help us work on a set (and bring his truck!) he would always say yes and often rearrange his schedule in order to give us much needed assistance,” said Amy Dul, executive director of the Philipstown Depot Theatre. “He always had a lighthearted presence cutting through the tensions of set-building plans that often go awry. Nancy and Jim brought in many international music acts to the Depot Theatre, such as Tuck and Patti, Maia Sharp and Bruce Molsky.  Jim paid much attention to detail in setting up sound for these events and to making the performers feel welcome and well taken care of. He was the type to just immediately ‘fit it’ to any scenario, willing to be the leader or the follower as needed. I was always glad to see him, as he treated us all like cherished family with a hug and a kiss, whether we had seen him a day ago or a month ago. Tears roll down my face as I say we will all miss him dearly.”

“Jim and I became friends in recent years as our sons are in class together at Haldane,” said John Maasik, chairman of the Philipstown Recreation Commission. “He was one of the fathers I would see at every school event, supporting his family and the school. As a mutual friend of ours said, ‘Jim is the kind of guy you move to Cold Spring to meet.’

“Our friendship grew through our involvement with the town Recreation Department,” Maasik continued. “Jim was always there to lend a helping hand, volunteering for events at the Depot Theatre and senior citizen community lunches at the rec center. Whenever we spoke, we would have thoughtful conversations, largely around family and our community, which he loved dearly. He spoke highly of living in Lake Valhalla and the natural beauty of Philipstown. He was genuinely interested in how I was doing; Jim always offered kind words and support that I will never forget. I feel blessed to have seen Jim recently. Just last week, when he picked up my son for an activity, I invited him in for a cup of tea. His response was ‘I’ll get you next time, John.’ I’ll always feel like I owe Jim that cup of tea, and hope to continue our conversations one day. The world was made a better place by Jim Lovell.”

Lovell built a freelance consulting career that included skills in both technical areas of media and writing. He had a long relationship as an audio technician with NBC’s Today show. NBC dedicated the Rockefeller Center tree lighting to his memory.