Opening the collection and connecting with community

Dia: Beacon, which celebrated its 10th anniversary earlier this year, is actively engaging with the local and regional community and hopes to continue to expand and enrich programming and educational outreach.

With a managing director, Susan Batton, who lives locally, Dia intends to forge real community connections. It is actively involved in BACA – Beacon Arts Community Association, has brought in local business Homespun Foods to manage its café, and has collaborated with hometown institutions like Clearwater, the Garrison Institute and Beacon Music Factory’s Stephen Clair on events open to those from neighboring communities – including Philipstown – free of charge.

The museum is thriving; last year it saw 80,000 visitors, while 10,000 people viewed Dia’s collection of art from the 1960s to the present this past October alone. Along with the many permanent single-artist, site-specific galleries designed to present that particular artist’s work, there are changing exhibitions, new commissions, and a host of activities designed to produce greater interaction between the public and the collection.

These activities range from monthly gallery talks – traditional and scholarly lectures – to more experiential activities designed for varying age levels. Dia Art Foundation’s Director of Communications Melissa Parsoff says, “We find that once people come and engage, the work is much easier for them to wrap their brains around. It’s fascinating to see.” Dia’s Manager of Education April Lee expanded on this: “We’re still finding ways to open the collection up. We learn from our visitors, seeing the way they approach and understand the work.”

On quarterly Community Free Days, (CFD) residents of counties from Columbia down to Westchester — Dutchess and Putnam included — are invited to partake of a host of activities, including programs for children, workshops for all ages, as well as collection tours and gallery talks. The programming is intentionally diverse and designed for different types of learners. 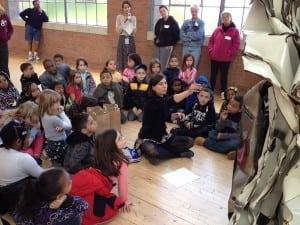 A group participating in one of Dia: Beacon’s Arts Education programs.

Examples of activities from CFDs earlier this year included a Mark-Making with Sound program for kids; a session co-led by Lee and Maija Niemisto, Clearwater’s director of shipboard programs, examining unique approaches to environmental activism, with a focus on the work of Clearwater founder Pete Seeger and Dia artists such as Walter De Maria, Joseph Beuys, and Robert Smithson; an ‘origami lab’ interactive tour and workshop for teens and adults exploring formal concerns of minimalism and advanced paper-folding techniques, and a community reception sponsored by the Newburgh Brewing Company.

The next CFD, to be held in January, will focus on movement-based awareness of internal landscapes, as well as its connection to the galleries. There will also be a time capsule project involving the community. Dia also offers free admission for City of Beacon residents every Saturday and Sunday.

Dia considers its education component thoughtfully, says Lee. “We take cues from how we work with artists. In our work with our educators, first of all we take care in our selection, whether it is for museum guides or the educators on CFDs. We try to provide support and the tools to commission an educational experience which meets our standards and pushes our boundaries.” For example, Alli Ross, who will be leading a movement workshop in January was invited to Dia to spend time in the gallery, with a goal, says Lee, of “coming to understand the space and the collection, thereby giving her both the knowledge and the freedom to create something in response to the space. It’s the same approach we have with musicians, scientists: to produce a workshop grounded in the space it is in.”

Curiosity at work at a 2012 Community Free Day at Dia: Beacon

Parsoff adds, “We’ve done this with all our dance programs, whether it’s Merce Cunningham, Yvonne Rainer or Steve Paxton — it’s very important that it’s a response to the space.”

Dia invests in their guides, those presenting the collection as a whole, or guides who speak specifically on a temporary exhibition, for example the major retrospective on sculptor Carl Andre (the first since the 1970s) opening next May and running through March 2015.

“We develop a core of guides, a range of artists, art historians and educators trained to be knowledgeable facilitators, not lecturers,” Lee said. “We like to put the visitor into the driver’s seat and to make the tour a subjective experience, an inquiry-based tour. Our guide program continues to evolve.”

At times ideas about how to open up the collection are gleaned from the many children who visit as part of school groups and/or are part of Dia’s school outreach program in which an educator visits a school prior to the children’s trip to the museum. As an example, Lee describes the reaction of a second-grader from a Beacon school to an activity in which children were each given an object and asked to describe it without naming it.

Connecting visitors with the space at a Dia: Beacon Arts Education program. (Photo by Meredith Heuer)

One boy, given a pencil, could not find any descriptive words for it. “It was hard for him to have an object that he couldn’t describe; and it was a fear that what he would be saying was wrong. That really threw the door open to us about thinking about how people can be intimidated. We applied this to an activity relating to ‘white paintings’ and by the time the students got to Dia and saw the Robert Ryman gallery [of white-on-white paintings], they were fist-pumping and making all sorts of observations: ‘this surface is dull,’ ‘he’s using brush strokes in this one,’ ‘look at the light’ — things like that.

Teenagers occupy their own niche within Dia’s educational programming. “We wanted to shift away from traditional structures, and we also wanted to be more inclusive, reaching out to teens throughout Dutchess County and places like Newburgh,” said Lee.

This past year a summer program was developed wherein 16 teenagers were asked to ponder the question “What is the role of a museum in a city?” The teens were recruited through visits to five public schools, along with the Newburgh YMCA getting the word out. “We covered the costs of their transportation to the museum, provided lunches and a stipend. We really wanted to make sure there were no socio-economic boundaries. We asked them to think about what the best ways are for a museum to be connected to a community.”

Two participants in a school tour group at Dia: Beacon

In collaboration with the Center for Urban Pedagogy, the students interviewed curators, met with the director of education at MOMA, and the vice president of the Tenement Museum, as well as with former Beacon Mayor, Clara Lou Gould, who discussed the work done by the city to procure a museum. The students also participated in a roundtable with State Sen. Terry Gipson. They created a work based on their findings creating imaginary utopian/dystopian museums of the future. “It was a lot of work,” says Lee, “but so rewarding, and our goal is to step back and support a space for them to create.”

Some of the findings were revelatory and connected to the museum as a whole. Lee explains: “One student told us that ‘my parents didn’t have the prior knowledge to engage with the space and they left intimidated.’ This showed us that we need to work to make the concepts more accessible; that’s the most profound way to outreach…It sounds simple, but it takes a lot of work to get it right, but it’s essential because this work isn’t meant to be intimidating.”

The next Community Free Day takes place on Jan. 11, 2014, and, along with the movement workshop, will feature Christopher Bennett speaking on the current Alighiero e Botti exhibit at 2 p.m. For more information, visit diaart.org.