Fans of unfunded mandates would’ve found little favor Wednesday night in Carmel, where State Sen. Terry Gipson, a Democrat, got strong support from the largely Republican Putnam County Legislature for his efforts to prevent their New York State counterparts from creating must-do projects and foisting the costs on counties.

The county legislature’s agenda for the evening already included several measures attacking unfunded mandates, and Gipson’s presentation on his attempts to curb them drew loud applause.

Telling the county legislature that he understands all too well the burden of unfunded mandates, Gipson, a first-term senator and former town official in Rhinebeck, outlined three pending legislative initiatives addressing them. His senatorial district includes Philipstown and other parts of western Putnam County. 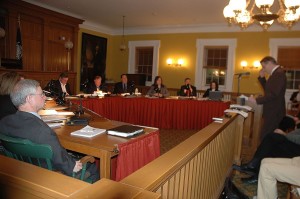 Gipson said that for three decades, members of the state Assembly and Senate have dreamed up mandates, required programs for public services and actions imposed on lower levels of government, “many of which are good ideas, services which we should be providing. But they haven’t provided the funds to pay for it. They’re asking you to do it, which I think is irresponsible” and consumes dollars a county could spend on dealing with in-county needs. “You weren’t elected to take care of New York State,” he said. “That’s what I was elected to do. It is our responsibility to pay for the ideas we come up with.”

He is promoting three initiatives on mandates:

If successful, the latter two could bring Putnam County about $10 million in state aid, Gipson said.

Despite the state’s supposed money woes, Gipson said Albany could pay for the mandate aid he envisions, though it might require something like cutting a few state officials’ salaries. “I’m confident the money is there. That’s not the issue.” Rather, he said, the problem is getting action from his State Legislature colleagues, many of whom have served term after term and “lost touch with reality.”

“What are really needed are term limits on the higher levels,” Legislator Dini LoBue proposed.

Gipson agreed and noted that he has sponsored legislation to limit an individual to 16 years total in the State Legislature, Assembly and Senate combined, or 12 years in either chamber. “It’s a very hard thing to get done,” though he remains confident of ultimate success, he said. “This is not a partisan issue,” he added. His co-sponsor in the Assembly is a Republican, Kieran Lalor, of Fishkill.

Unlike most counties in New York, Putnam does not return to villages and towns any sales tax collected in them. At the county-budget level, “we survive on the sales tax and property tax,” noted District 1 Legislator Barbara Scuccimarra, a Republican who represents Philipstown.

Gipson sees mandate relief as a boon to sales tax sharing. “If you’re not having to spend all your money paying for Albany’s ideas, you ought to have more to help out your local governments, and it seems like that’s the right place to start,” he said.

In August, the Philipstown Town Board endorsed Gipson’s proposed constitutional amendment on mandates and the senator sought the County Legislature’s backing for this and his other measures as well.

“I don’t think we’ll have any problem doing that,” Scuccimarra assured him.

Legislator Sam Oliverio, the County Legislature’s sole Democrat (though he has also run as a Conservative Party candidate) asked for Gipson’s assistance regarding the state’s Common Core educational standards and testing, a source of much consternation among parents and teachers. “Have them revamp the Common Core. That is bankrupting our school districts,” asserted Oliverio, the assistant principal at Putnam Valley High School.

“I’m all for putting this whole Common Core on hold, finding a better way to do that,” Gipson replied.

Among other senatorial causes, Gipson mentioned assistance to military veterans, which drew Othmer’s praise. “He’s very pro-veteran and he does a lot of good work,” Othmer said.

Among other topics, Gipson also brought up the fatal Dec. 1 Metro-North Railroad train accident that killed Philipstown resident Jim Lovell and three other riders and injured dozens more. “We’re very much keeping tabs on the Metro-North situation,” he said. “While our heart goes out to the families – Philipstown is obviously suffering very much – we are committed to holding MTA and Metro-North accountable, to making sure it does not happen again and that they put in place the safety mechanisms needed to do that.” He promised the legislators “to keep you posted on that as well.”

When Gipson wondered if the legislators had other concerns to talk about, nothing came up. “Just keep on doing what you’re doing,” Scuccimarra told him.

One resolution, promoted by Oliverio, requests that the state “abandon the hurried rush to compliance” with the Common Core “and take the time needed to set it right, emphasizing the needs of students.”

Another, arguing that “other states throughout the country have been known to send people to New York State to receive benefits” and the county consequently “has experienced an influx of out-of-state residents” claiming welfare, “resulting in an increase of hundreds of thousands of dollars to county taxpayers,” asks that the state “establish a residency requirement for receiving welfare benefits.”

Before adjourning, at Scuccimarra’s suggestion the legislature observed a moment of silence for Lovell, whom she described as “a gentle, quiet man” who “will be sorely missed in our community.”