After running one of Beacon’s first noteworthy art galleries – the Van Brunt Gallery – for an eight-year stint, Carl Van Brunt closed up shop in 2010. He opted to take a position as gallery director at the Woodstock Artists Association & Museum (WAAM) and to curate and produce exhibitions independently. Van Brunt, and his wife, Suzanne Ball – now under the banner of Van Brunt Projects – have done just that in recent years. 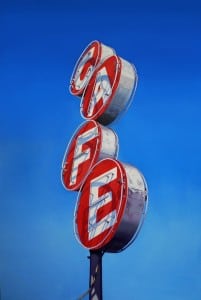 The latest project, an exhibition of works by Mary Anne Erickson, called Vanishing Roadside, is now open at the upstairs gallery at Hudson Beach Glass in Beacon. Van Brunt Projects largely focuses on “pop-up” exhibits, art fairs, and short exhibitions. Van Brunt says that Ball, “has a great feel for the process of picking art.”

At WAAM Van Brunt does not function as a curator, but instead handles things like communications, budgets and infrastructure, while the many main gallery shows themselves, featuring works submitted by members, are juried by outside people. His contribution to deciding what is shown there is largely in helping to select these jurors, who are ideally not tied to the Woodstock art community, insuring impartiality.

“This keeps the level up,” says Van Brunt. Two other galleries contain solo shows by contemporary artists and works from the permanent collection respectively. One advantage to working in this capacity, is that Van Brunt is exposed to an enormous number of artists (there are more than 200 members of WAAM) working in quite a large region, and then, when opportunities for independently produced shows elsewhere open up, he is able to call upon this familiarity and determine which artist or artists might be a good fit with the projected exhibition.

Such was the case this time, when, at short notice, the gallery space at Hudson Beach Glass became available for a key — just before the holidays — time period. Van Brunt thought that Erickson’s paintings would work well there and, a couple of weeks later, a show was born. “All of the artists aspire to transcend the region,” says Van Brunt, “and I’m able to help some of them when their point of view and my point of view converges in the wider sense.” Van Brunt Projects had previously produced a show, Route 28 at the gallery nearly three years ago, which featured the work of seven artists whose “aesthetic was indigenous to the Route 28 area,” describes Van Brunt. 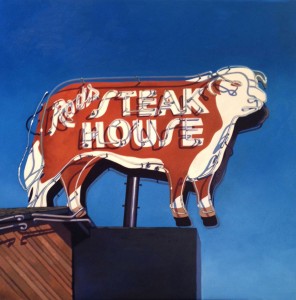 Each of Erickson’s Vanishing Roadside paintings has a story to tell. These vivid photo-realist images tell a visual story about America’s roadside architectural marvels, those diners, gas stations, foodstuffs and signs, which once (and increasingly rarely still,) dotted the automotive landscape. Erickson has been lured off the highway documenting these places for more than 30 years. In her blog, she engagingly tells the story behind each painting, including how she came to photograph it, its owners, history, its current situation and more. An excerpt from her artist statement reads:

“My love of our uniquely American roadside culture is born out of my childhood … In the 1950’s post-war America there was a sense of adventure when you set out on a “road trip.” The whole country was a vacation playground with family-owned “mom and pop” motels, restaurants, and diners catering to travelers with their regional themes and local food specialties. Each business did their best to create a unique name, sign, or building that would attract attention and boost their notoriety … The beginning of the end came in 1956 with the opening of the Interstate Highway system. Simultaneously, “modern” hotel motel chains such as Holiday Inn fascinated travelers, further undermining the old roadways and their related small businesses. Some relics still remain, abandoned, but many have been torn down to make room for a new strip mall or parking lot. I have enjoyed seeking out the icons that remain, and memorializing them for future generations to appreciate! … I started this work in the early 1980s immortalizing some of my favorite Florida motels; as time has passed my fascination with this theme has continued to grow. I’ve come to realize that my passion for preserving these treasures from the past is truly my artistic legacy.”

Suzanne Ball and Carl Van Brunt, pictured in front of a work by Mary Anne Erickson at the Vanishing Roadside exhibit at Hudson Beach Glass (Photo by A. Rooney)

Van Brunt Projects has a number of forthcoming ventures. In conjunction with the Handel’s Messiah concert at St. Mary’s Church on Dec. 22, they are curating a show called Spiritualized, which will contain art with some spiritual component, loosely defined, “unorthodox and without iconic references,” says Ball. It will include works in a variety of media by Jane Bloodgood, Melanie Einzig, Leonard Freed, Thomas Huber, Tony Moore, Joel O’Dorisio, Doug and Mike Starn, and Van Brunt himself. There will also be a floor-to-ceiling video by Patrick Kelley in which images of 175 cathedrals cross-dissolve.

In January, Van Brunt will curate a show of works by James Westwater, titled Edge Ponies, at Beacon’s Mad Dooley Gallery. Westwater is a former Beacon resident who moved to Texas, and is returning for a visit. Van Brunt describes his work as “post- post- modern and conceptual. Very minimalist small abstracts.” Some of these works are related to a residency he had in Lisbon, where much of this work will be shown later in 2014.

Vanishing Roadside runs through Dec. 21; it had a soft opening on Nov. 23, and there will be an artist’s reception from 6 to 9 p.m. on Second Saturday, Dec. 14. Visit vanbruntprojects.com.