After two runs based in Cold Spring, the Putnam Cycling Classic bicycle race will be centered in Brewster for 2014, although the main cycling route will again loop through Philipstown.

The May 10 event will feature four bicycling opportunities – two for experienced and competitive cyclists, as before – and two geared for more leisurely riders – and be part of a weekend of fair-like activities in Brewster, according to event organizers. What’s billed as “the first-ever Putnam Pasta Picnic, a pasta and meatball feast,” likewise is part of the mix. 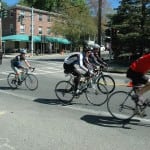 The 2013 race took place in Cold Spring May 5, the showcase of a Pedal into Spring weekend of festivities coordinated by the Cold Spring Area Chamber of Commerce. Pedal into Spring involved street vendors, music, and Main Street activities in conjunction with the bicycle competition, which drew international-class racers and media attention as a stop in the UCI World Cycling Tour. But while many in the community, including businesses, regarded the race as beneficial, others complained that the Cycling Classic kept customers from Main Street shops and snarled local traffic. Critics voiced objections well before race day and in part echoed concerns raised when the first Cycling Classic, held in Cold Spring on Oct. 14, 2012, left some merchants feeling revenue-deprived.

Unlike the 2012 and 2013 races, the 2014 Putnam Cycling Classic will be held on a Saturday, the day before Mother’s Day, and planners are encouraging would-be participants and fans to make it part of family-oriented weekend outings.

Avid cyclists can choose either the 100-mile course, a timed competitive route, or a 62-mile version, “for intermediate level riders who want to continue to ride longer and further and challenge themselves with a few timed elements,” a Dec. 3 Tourism Office news release stated.

Those interested in more of a frolicsome than furious pace can join the Tour de Putnam, a revival of a previous amateur-oriented event, with 12-mile and 24-mile routes through the eastern end of Putnam County.

The 62-mile and 100-mile courses will come through Philipstown, so “we’ll definitely be in Cold Spring,” Ray Fusco, Putnam Cycling Classic event producer, told Philipstown.info on Friday (Dec. 6). Nonetheless, the race headquarters and other elements will be based in Brewster, which offers a lot of logistical advantages, he said.

Like Cold Spring, Brewster has train service through Metro-North, an important consideration in efforts to bring cyclists and other participants to the race site, but also has a wider Main Street and center-of-town configuration and ample parking, Fusco explained. An old town near the Connecticut border, it likewise is the focus of economic revival efforts and “there’s a lot of attention being placed on Brewster” from local through state levels, he noted. Moreover, it has years of practice in successful Founder’s Days, shutting down streets and holding a celebration in conjunction with a long-distance running race, Fusco added. “Brewster has an enviable track record,” he said. “We’re excited about learning from them how to do this.” 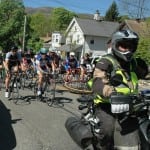 Riders cluster together for the start of the 2013 race in Cold Spring. Photo by L.S. Armstrong

Brewster Mayor James Schoenig welcomed the bike race and everything associated with it. “Brewster is open for business. We are thrilled Tourism chose Brewster and we want to make it a great event,” he said, according to the Tourism Office news release.

Tourism Office Director Libby Pataki did not immediately respond to a request from Philipstown.info Monday afternoon (Dec. 9) for comments on whether the controversy generated in Philipstown by the 2012 and 2013 races influenced the decision to move the 2014 race to Brewster.

While the race will start and finish in Brewster, she noted in the news release that “our four routes will encompass every town in our county, making this a truly comprehensive and beautiful event.”

Pasta picnic prices are $8 for adults, early-bird rate, and $10, regular. The youth rate is $5, with the early-bird discount and $6 otherwise.