One of the four soloists performing in the Dec. 22 performances of Handel’s sacred oratorio Messiah at St. Mary’s (2 p.m. and 5 p.m., see brownpapertickets.com) will in essence be coming home for the holidays. Nicholas Tamagna, who spent a great deal of his youth in Philipstown, will return to Cold Spring for the occasion. Tamagna is a countertenor, a highly specialized vocal realm in which the falsetto is developed with a strength which brings a power to a male equivalent of a female range. The trademark of a countertenor, vocally, is agility, suiting a repertoire which flourished in the baroque period then lay nearly dormant until its rediscovery over the past 50 years with new music created for it. 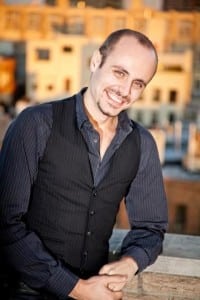 Formerly a tenor, Tamagna shifted to countertenor after advice from a teacher about six years ago, and, after intensive (and continuing) training, has had a great deal of international success over the past five years, performing frequently in Germany, and placing well in a number of international competitions. Philipstown.info/The Paper spoke recently with Tamagna about the development of this unique career, his thoughts on Messiah, and his ties to this area.

How did you find your way to that vocal range?

I went to school and trained as a tenor, but the range was too much for me – I couldn’t sustain it in my chest voice. I was at wit’s end; I could never do artistically what I was feeling intellectually. I wasn’t getting work because I lacked the confidence in my work. I met a teacher, Alyssa Grimaldi, after I finished getting my degree [at Manhattan School of Music], when she came to an opera I was appearing in as a tenor. She told me I was great on stage, had presence, but had technical issues. She invited me to come work with her.

She is very intuitive about voices, very right about people. She came to the conclusion after just one lesson, that I was a countertenor. We went through all different things, from musical theater on. I tried one Handel piece, singing along with a recording, and it was very easy for me. I sang just this one aria, she looked at me, and it was like “wow, okay, that’s your voice.” Her husband even came out from another room and said, “whatever that was, that was it!”

The first year we met two or three times a week for three to four hour-long sessions without a break. With that work, suddenly, artistically I could express what I wanted, and only then did I have successful auditions, then got a manager.

What’s your description of the workings of a countertenor? 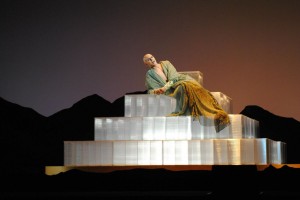 Most countertenors actually, if they use their normal voice, it’s a baritone. Baritones tend to have a certain larynx make-up: a more prominent Adam’s apple, the pharyngeal track is taller. Tenors often have shorter necks and are stockier. The anatomy can change what your abilities are. Falsetto uses the edges and more mass at the top, the upper quarter; that ability to create bigger sounds is a countertenor. Baritones have better falsettos than tenors, in general.

Only the last 50 or 60 years have we begun to understand what’s going on. Some teachers still shy away from it — they don’t know what to do with it. Countertenor singing in male voice is about not putting pressure on the voice, there’s a heady quality to it — if every male singer worked with it they’d learn a lot.

Was it intimidating or liberating to finally peg yourself as something so specific?

It was extremely liberating for me. The repertoire is mostly Baroque; after Mozart’s time not a lot was written for male voices in that range. I had already been interested in pre-Mozartian music, had done a lot of earlier music choral work. Now there’s a whole movement — everyone is into early music again – it has taken 40 to 50 years.  I’m coming into it at a great time; a lot of groundwork has been done, though it’s harder to find opera work in the U.S. so I’m doing a lot in Germany.

The stories of the operas are not as dramatic as the 19th-century opera, which is so much more popular here in the U.S. now. The stories are usually based on historical characters, and all is geared to the music – there is usually a convoluted, really fast, positive wrap-up. In Handel’s case, he was writing for public opera companies where the general public was able to see it because there were cheap seats available. These operas were quite long and they were social events — a place to stay warm and interact. We see opera now in a post 19th-century way: we’re quiet and we listen, but then, outside of the court, there was much more talking and listening just to the parts you wanted to hear. Baroque music is full of tricks, ornaments, filigree. It took you out of your daily life. Today they can be seen as frivolous and frilly, but spectacular in the truest sense.

Would it have been better for you had you discovered you were a countertenor sooner?

No. Sometimes the struggle is what you need to give you that hunger. I have a different appreciation for it now that I’ve had to work for it. I’ve also honed other skills: languages, reading about vocal pedagogy, other things, because I cycled through so many voice types. It has given me a perspective on many voice types and how they relate. It also makes me a good teacher. Because my teacher was so intuitive I learned so much from watching her. I always felt pigeonholed, put into a category. 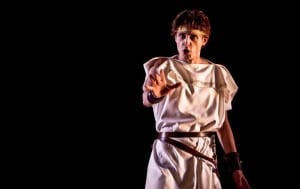 Now I have a different perspective: everyone has a particular voice. It’s so easy in classical music to pigeonhole and if you’re not a “type” it’s hard, so don’t label yourself. Figure out what’s inherent about your voice and work on that – don’t categorize yourself. Even within typical voice types you can find ways to make a niche. A lot of students feel pressure to adhere to something without taking time to find out what their personality wants to create. That’s a part of living life as an artist. It’s always changing — you have to be willing to go with that. You must reinvent yourself. Some can’t and get stuck. Over time less and less people stick it out: perseverance counts. I just kept working.

What are your feelings about Messiah?

Messiah is an amazing story no matter if you have an investment in the religion itself. It’s highly dramatic, emotional, melodic writing. It’s an amazing story of someone coming to earth to save humanity. That kind of story has always been a part of human history. Messiah is a bit of a metaphor for life. Emotionally, I get to sing a lot of alto parts. The alto often gets the gravitas, the Mother Earth. I can bridge the gap between the high voice to low, masculine yet high – it isn’t gender-biased, neither man nor woman, not a special character, but a narrator who is emotionally invested in the story. With oratorio it’s about finding the specific moment they’re trying to capture, magnified by the music. It’s a beautiful piece to delve into and study as there is such a wealth of different perspectives on the story given throughout the piece.

I’ve done eight or nine different kinds of Messiahs – you never know what to expect. It’s fed by the type of orchestra, the conductor, your fellow soloists, the choir and the audience. I’ve done it in a small church and at Avery Fisher Hall; both have their merits, whether it’s  intimate or filling a large space with sound. You can go see it 1,000 times and always hear something new. It transcends time and I’m always honored to do it.

Although you did not grow up full time in Cold Spring, you have great ties to the area; what are they?

I’ve been coming to Cold Spring ever since childhood. It’s a place that I grew up in even if I didn’t live there the whole time. When I was 10 I did a Hand-To-Mouth show at the Depot Theatre; I worked at Boscobel as a ticket taker at the Hudson Valley Shakespeare Festival, so I spent a lot of time there. Right after college I moved in with my dad (former Putnam County Legislator Vincent Tamagna) for about three years, full time. These were formative years, in which I was trying to launch a career. It’s so inspiring, with the mountains – it’s almost an artist’s retreat of a sort. New York City is great – there’s an energy that can’t be duplicated, but in Cold Spring there is this beautiful nature surrounding you and a community of people.

I worked at Cathryn’s and Cathryn was really supportive of me when I finally decided to do this full time. Cold Spring to me was almost an artistic incubator; it allowed me to figure out my next steps. I have a reverence for the area. I now live in Manhattan and travel quite a bit – I’m away more than home. Manhattan has been an amazing place but Cold Spring is more to me like home, in a way.