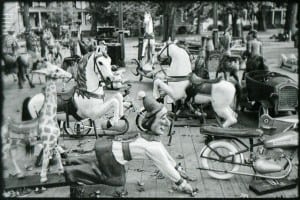 School of Jellyfish will host an opening reception for Fete Paradiso, a collection of photographs by Charles Giraudet, and a tree lighting holiday party at 6 p.m. on Saturday, Dec. 14, in Beacon. The event includes holiday cheers and bubbly libations. [Due to weather, the event has been rescheduled to Dec. 21, 6 – 9 p.m.]

Last summer, visitors to Governor’s Island in New York were able to experience the Fete Paradiso, a collection of French amusement rides from the 1880s to the 1950s, a period during which much of the vocabulary of fair design was invented.

The Paradiso series documents the Fete’s dismantling when parts of the carousels with their toy cars, ballerinas, horses, dragons, lions and cartoon characters were moved back to crates and containers to await their next outing.

Through the looking glass of a documentary approach, Giraudet is interested in how objects and spaces are vehicles for memories, real and imagined. The exhibit is on view through Jan. 5. School of Jellyfish is located at 183 Main St., Beacon. Visit schoolofjellyfish.org and charlesgiraudet.com.