Grey Zeien is a familiar face in the Cold Spring area, having operated his business, Grey Printing, at 37 Chestnut St., since 1999. He is also well known as an artist and has tried his hand at acting. The Paper’s Michael Turton recently spoke with Grey about the various “hats” that he wears, what inspires his art, how art and business intersect – and how he ended up pursuing both – and even the origin of his name. Responses have been abbreviated.

The Paper: Where did you grow up?

Grey Zeien: All over the place. Connecticut. Massachusetts. West Germany. My father was an international businessman.

The Paper: Where did you attend college?

Grey: I studied Fine Arts at Cornell then moved to New York City to become a famous artist – until I realized I had to buy groceries.

The Paper: How did you get into the printing business?

Grey: I worked as a graphic artist at The Daily News – pasting up the paper at midnight. I then got a job at an ad agency and eventually took that over. We moved to Cold Spring and in 1993 I took a second-floor office at 71 Main St., next to The Pig Hill Inn. I hired Ruth Eisenhower. We had a little sign that said “Copy Cats” and we just did photocopying and faxes. We moved to our current location in 1999.

The Paper: What inspires your art? What media do you work in?

Grey: I don’t really have an answer. What inspires me is the everyday – things that most people pass by and don’t pay attention to. I work in all media – painting, sculpture and most recently “found objects” – things I collected over the years. They were the basis for a show called “Stuff and Nonsense” that just finished in Beacon. 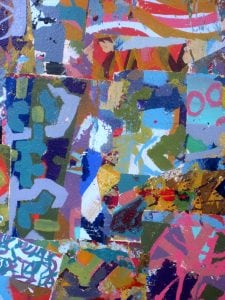 The Paper: In terms of your art, what has been most satisfying?

Grey: The recent show was really gratifying. I’ve been collecting these assemblages for 25 to 30 years and just decided one day to create a show. It’s stuff – there’s no name for it. People have been so responsive – I’ve never had so many compliments.

The Paper: Do you find it ironic that a large part of your business involves copying things in various forms, whereas your art is all original?

Grey: I think the art is a reaction to the business. The business is entirely results oriented. The art is all about the process.

The Paper: Do the two endeavors influence each other – or are they totally separate?

Grey: They are complete polar opposites. Approach and results. But I couldn’t do one without the other.

The Paper: Do you still do some acting?

Grey: I was one of the founders of The Depot Theatre when it opened – but I don’t act anymore. I got tired of hyperventilating! Once the words started to roll I was fine … but not the 30 minutes leading up to it. And there are too many people more talented than me.

The Paper: What is the last book you read for fun?

Grey: I’ve been reading a lot of Jo Nesbo – Nordic crime dramas. The last one was Phantom.

The Paper: A while ago you looked into producing custom-made wallpaper at Grey Printing – with customers providing their own unique designs. Were you surprised there was no interest in that?

Grey: I learned – or relearned again – that it’s almost impossible to create a market for something. Most people are afraid to trust themselves. I didn’t get one call.

The Paper: Are you looking into 3-D printing? What do you think of it?

Grey: I’m reading a lot about it. Again – it’s creating a new market. It’s amazing what you can do with it but I haven’t had one request. It’s becoming affordable but you have to watch your pennies in this business.

The Paper: What’s on your favorite pizza?

The Paper: What’s with that derby you wear sometimes? Is it for comfort or is it a fashion statement?

Grey: It’s for comfort. I own about 40 hats from around the world. I’ve always worn a hat.

The Paper: What’s one skill you don’t have that you’d like to develop?

Grey: To play a musical instrument. I would have been a great rock ’n’ roll star.

The Paper: If you could expand in one area, would you choose art or business?

The Paper: How do you describe your artistic style?

The Paper:  Is there an artist you admire most?

Grey: My all-time favorite was Paul Klee, a Swiss artist in the early 1900s. He was eclectic. He made works like no one before and no one since. Some were super realistic etchings, some were abstract. You could tell he was doing it for himself. Very impressive – especially in this day and age.

The Paper: Are you ever completely satisfied with a work when you finish it?

Grey: I have to quote Matisse to answer that. “No painting is ever finished – merely abandoned.”

The Paper: When you were named … did it have anything to do with the author Zane Grey, whose name you bear in reverse – phonetically at least?

Grey: My parents deny it. But the most popular TV show the year I was born was Zane Grey Theatre – and my dad read all his books.

The Paper: What do you do to relax?

Grey: My wife says I never relax. I’m not good at sitting around. I’ve never sat down to watch a football game. I pretty much have to be doing stuff – but I’ve never been bored.

The Paper: What’s your favorite thing to do as an adult that you used to do as a kid?

Grey: I was always drawing as a kid. And I’m still doing it now.

The Paper: What was your first real job as a teenager – where you actually earned a paycheck?

Grey: I was an assistant gardener at a hotel in Germany when I was 13. I couldn’t understand a word the gardener said – he spoke only German.

The Paper: What’s one thing you remember about Germany?

Grey: If you were old enough to see over the bar they’d serve you a beer.

The Paper: If you could take a whole year off – what would you most want to do?

Grey: Travel. My wife and I travel as much as we can. I’d probably just hang out in southern Europe. And Morocco is one place I’d like to go … and immerse myself in that culture.

The Paper: What time in the morning do you consider to be sleeping in? 9?

The Paper: Why does the sign at Grey Printing say “Ruth is not in” instead of “Grey is not in?”

Grey: People used to constantly walk in – at least two a day – asking “Is Ruth here?” She’s been with me since day two.

The Paper: If you could play the lead role in any movie, what role would you choose?

One thought on “A Conversation with Grey Zeien”