A few years ago, a little splotch of romesco sauce arrived on my plate as part of a dish I was served at Il Buco Alimentari e Vineria, a wonderful little restaurant on Great Jones Street in Manhattan. I don’t remember what it accompanied – maybe shrimp, maybe lamb. It didn’t matter. The sauce, really more of a paste, would have made anything taste good, even kohlrabi (as long as there wasn’t much kohlrabi).

I had eaten – and made – romesco before, and liked it very much. But this one was different. It had the kind of layered flavor that emerges in your mouth like a series of breathtaking, developing Polaroids and makes you want, as soon as you’ve finished one bite, to go back and have another so as to experience the whole unfolding process again.

I asked the waiter about it, why it was so good, and his eyes lit up like someone who had just been asked to describe his beloved. He said that it contained smoked paprika, chocolate peppers (a small, sweet, heirloom bell pepper) and piquillo peppers, plus New Mexico chiles and (aha!) Marcona almonds. Marcona almonds are fat, sweet, tender almonds that often are fried in olive oil and sprinkled with sea salt. 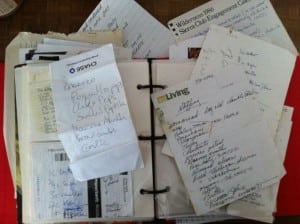 Like the almonds, romesco itself comes from Spain – the Catalonia region. Traditionally made with peppers or chiles, toasted nuts, bread, olive oil, and garlic, it has evolved into many variations, which can include vinegar, tomatoes, onions, fennel fronds, mint, and parsley. I am always interested in the little differences that send a more-or-less familiar dish into the stratosphere of deliciousness, so I eagerly wrote the Il Buco version down on a bank envelope. Back at home, I placed the envelope in my recipe book.

Last month, I pulled out that book, as I do before every holiday. Contained within its rag-tag pages is my whole big-feast repertoire: Recipes hand-written, photocopied from cookbooks, and cut from magazines; wine-bottle labels; notes on birthdays and dinner parties and what worked or didn’t at each.

The romesco envelope was in good company there, and one of a dozen scrawled-on-a-scrap recipes – many of which are nothing more than lists of ingredients, with no quantities, no techniques, no directions.

Until now, the star of this scruffy group was my stuffing – a list of 19 ingredients on a sheet of early Martha Stewart Living note paper. It was jotted down nearly two decades ago by Susan Sugarman, an unforgettable cook who worked for many years in the test kitchen there. It is what my husband is referring to when, upon being asked what he wants for Thanksgiving, says, “Make that great stuffing.” 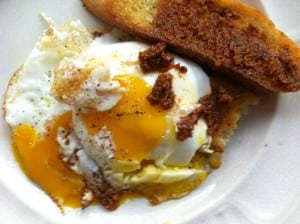 Anyway, flipping through the book, I happened upon the envelope featuring the romesco ingredients, and, already anticipatorily fatigued by all the pumpkiny, earthy, bready, nutty, maple-y flavors of the impending feast, decided to make it to serve with my sweet potatoes, a pairing inspired by chef Suzanne Goin. It knocked the stuffing right off its perch, and continued its victory dance long after the last of the turkey had been packed away in the freezer, the pecan bars devoured, and the mashed potatoes fried into mushy pancakes.

For the past two weeks, I have been craving it daily – smearing a little on toasted-cheese sandwiches, roasted vegetables, meats, and over-easy eggs (this last an especially sublime combination, especially if you fry a slice of toast in a little olive oil to eat with it).

One night, engrossed in a phone call, I had nothing but romesco on crackers and a Manhattan, neat, for dinner. It wasn’t quite as elegant as dining out in New York City perhaps, but at that moment, I couldn’t have dreamed up a better between-the-holidays feast.

Since chocolate peppers are out of season (and I’ve only ever seen them at the greenmarket), I made this with what I had on hand, namely jarred piquillo peppers and dried ancho and New Mexico chiles. You can substitute roasted bell peppers for the piquillo; roast them according to the directions here.