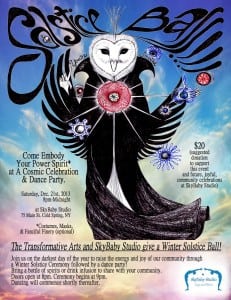 Those who seriously dread the short supply of daylight in late fall will soon have cause to celebrate. The darkest days will be a thing of the past with the arrival of the winter solstice on Saturday, Dec. 21 – and Sky Baby Studio in Cold Spring plans to celebrate the return of light when it hosts a Solstice Ball that evening at 8. Organizers have billed it,  “A Cosmic Celebration and Dance Party.”

The ball is the brainchild of Malia Marzollo, founder of Sky Baby and Eliza Starbuck, founder of The Transformative Arts.

“It’s about light – and community,” Marzollo said. “The community has been through a lot this year.” While winter is a time when people tend to “retreat,” she said that when a community comes together, “It can be nourishing.” Starbuck said that in celebrating the solstice, “It can set up the calendar for the whole year – if you can get past the darkest days.”

The evening will include a ceremony to mark the solstice, drawing upon many different traditions. “It’s important to have a ceremonial element,” Morzollo said. “It will be all inclusive – with something for everyone.” 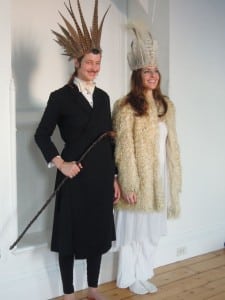 Eliza Starbuck and Malia Marzollo have their costumes ready for the Solstice Ball.

The “something for everyone” will incorporate music created by local artist Leroy Hankins. “He is putting together some very eclectic, transformative music,” Starbuck said.

Both Marzollo and Starbuck encourage people to come in costume. “You’re showing your community your true spirit, in all your glory,” Starbuck said. “A costume that fully embraces your power.” Marzollo commented that she hopes Superman shows up – and that wizards and other powerful beings are also welcome.

Costumes should probably include dancing shoes, as the floor will open for dancing right after the ceremony. Attendees are also invited to bring a beverage and a favorite finger food to share. Organizers would appreciate a $20 donation to support this and future community events at Sky Baby, located on the third floor at 75 Main St.

The term solstice comes from the Latin words “sol” meaning sun and “sistere” meaning to stand still. At the winter solstice the sun’s path briefly comes to a stop as it reverses direction from south to north.

At precisely 12:11 p.m. on Dec. 21, the sun will reach its southernmost position directly above the Tropic of Capricorn in the southern hemisphere, marking the beginning of winter. From that point on, the sun’s path will begin to inch its way northward, adding slightly more daylight to each day. While not noticeable day to day, the cumulative effect is soon evident. On Saturday the sun will set locally at 4:29 p.m. One month later, on Jan. 21, sunset will be at 4:58 p.m.

In the new year, June 21, 2014, will mark the summer solstice – the first day of summer and the day of the year when the sun provides its most shining light. On that day the sun will set at 8:31 p.m. – more than four hours later than the winter solstice.