After a brief flirtation with playwriting, Eric Starr reverted to the destiny of his DNA, returning where the arrow of genetics pointed: to life as a professional musician. Cold Spring’s Starr, a percussionist, comes from a long lineage of musicians. His grandfather was a trumpeter, while his father, who toured with the Tommy Dorsey Orchestra, played – and still plays – percussion, though now semi-retired. Starr’s brother Nelson is yet another musician. 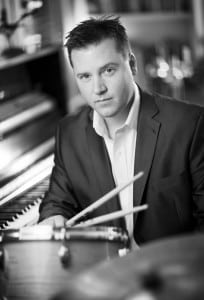 Home movie footage from his early childhood captured a toddler playing drums with spoons, cereal mush flying all over the place. Starr’s dad let him play with his drum set by the time he was 5 and “is to blame,” says Starr, “because I decided then that this is what I wanted to do. Initially it was drums and eventually I branched out, studying classical percussion, then taking piano lessons.” It all turned into a scenario where he was “taking lessons from several teachers at once, practicing all day, hours and hours, and I came to feel an internal drive to do this, so I went to college for music.”

A working life as a musician followed: playing gigs, composing and teaching. Starr recently released Such Is Life, his second CD.

A brief sojourn into the realm of playwriting came after responding to the works of Eugene O’Neill, but Starr returned to his natural habitat, noting:

Composing a play has its similarities to composing music in the creative process. They use the same sources. Arthur Miller said ‘the very impulse to write springs from an inner chaos crying for order.’ Something in us, somewhat inscrutable, is an impetus to take that essence and turn it into an order that communicates an artistic idea. The dialogue has to sound completely spontaneous and yet you as the author may be thinking about it for years, finding a way to make the rhythm just right. It’s the same with musicians: not laboring. With improv it feels similar to the back and forth of the dialogue. There’s often a call and response analogous to dialogue. I made a very conscious decision. I thought I was a good playwright, but I’m a better composer and musician.

By his 20s, Starr turned away from the “pretty heavy rock” in the band he had been in with his brother, and toward jazz. “Musically speaking,” Starr said, “it was not an option for me to write simple harmonies; I needed to use a wider harmonic palette; this pointed to jazz and contemporary classical works — modern versions of Debussy and Ravel.”

From Buffalo, where he was born and lived for 28 years, Starr moved to New York City to pursue jazz. He worked with a lot of people, “cutting teeth, throwing my drums in a cab for a job, living in a small apartment.” He came to Cold Spring because of jazz. His uncle, a Dixieland pianist, couldn’t make a gig at the Depot Restaurant and asked Starr to sub for him. Starr looked around during a break, saw the mountains and thought what a lovely place it was. 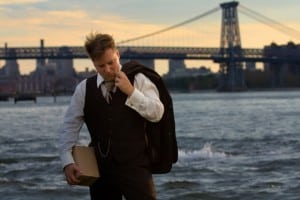 “My wife and I kept thinking of Cold Spring; we fell in love with it: the nature, the mountains, the river,” he said. “We like a walking culture, the little shops.” They (Starr’s wife Katherine is an occupational therapist, working in the Bronx) moved here in 2009.

After relocating Starr gradually came to know many musicians in town and the region. “Al Hemberger and Art and Stacy Labriola were among the first people I met musically speaking; they’ve been really great supporters in a number of ways. These kinds of connections have meant a lot to me. New York City is so much more anonymous, even if you’re doing well.”

Surviving as a musician requires multiple streams of revenue. Since the birth of his two children (one attends Haldane, the other is a preschooler), Starr has limited his touring, and earns his living from studio work, playing local gigs (he plays frequently with the band Painted Betty), giving private lessons locally and in New York City, and through composing music on commission. He has had “Meet the Composer” funding, received a Utah Arts Grant and had NEA funding through theater companies. He has also authored a series of books, in The Everything series, including The Everything Rock Drums Book.

Starr has also found the time to work on material for his new CD, which is all self-penned. Press notes describe the new material as “Culling elements of jazz, classical, and bossa nova … . The idea was to record a jazz quartet live in the studio, then add orchestral arrangements later on. Usually musicians are responding to previously composed orchestrations. In this case, the orchestra answers the players … This recording approach, while unorthodox, proved a perfect fit for the new material, which is a combination of carefully crafted melodies and spontaneous improvisation.”

Starr has also linked up with both Garrison School and Haldane.  At Garrison he runs the jazz ensemble, partnering with Karen Bresnan.  He goes in one day a week, working with students in the middle school grades. It’s not always easy.

Jazz is difficult for students — it’s not a part of their world. Rhythmically, the syncopation can be difficult. The concept of swing is tough for a kid — it’s amorphous. To play you have to have a very strong concept of it, yet it is hard to define. I don’t think jazz is dead, but it’s not really a part of the culture anymore except in New Orleans. Once upon a time it was the music of teenagers, the swing era in the ‘40s. Things change but I try not to think of it as a museum piece. It’s still a living music, but you have to really seek it out.

Starr also worked last spring on a Haldane School Foundation-funded coaching project with the jazz band led by Deb Contini, teaching improv and jazz phrasing, playing in an idiomatic style. The fruits of this labor were seen at the spring concert, and Starr hopes to be able to repeat it later this school year.

Starr says he feels blessed to make his home in Cold Spring. “When we moved here, it was kind of crazy. I had no clients here, a 7-week-old baby, no babysitter, nothing. But it all worked out so well, and I think we’re lifers.”

Visit ericstarrgroup.com. Such is Life may be sampled and/or purchased at amazon.com.