‘I never tire of hearing the bell’

Local residents may not all know Christine Locaparra by name but few would fail to recognize her – especially at Christmastime. Locaparra, who lives in Garrison, is the person behind the bell, the always-cheery woman who graciously accepts donations on behalf of The Salvation Army at her post in front of the entrance to Foodtown – in good weather and in bad. 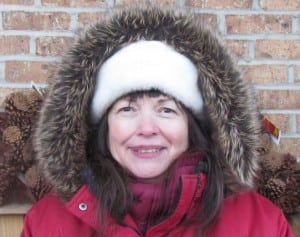 “This is my seventh year,” Locaparra told The Paper. Although she receives a minimal wage for her work, money isn’t her prime motivation. Asked why she takes on the task each year, she paused for some time before answering very simply. “I do it … because it’s a joy to do it. I just enjoy it.” And enjoy it she does – from just before Thanksgiving through Christmas Eve. During that stretch she works every day but Sunday from 11 a.m. until 6 p.m. – but not alone. “My son Rocco helps out. We share shifts,” she said.

Weather is a factor Locaparra can’t ignore, least of all during the recent cold snap. “During our training we were given instructions on how to dress. We come prepared,” she said.

If privacy regarding how much someone chooses to drop into the collection bucket is a concern, residents can rest easy with Locaparra. “I honestly don’t know how much people give. I don’t pay any attention. I’m just grateful they give,” she said. “People are very nice.”

Christine Locaparra and her son Rocco share  the workload in front of Foodtown.

Even though she hears its distinctive tone for six days a week throughout the entire Christmas season, Locaparra says that the ringing of the bell doesn’t get on her nerves.

“I never tire of hearing the bell,” she said, quickly adding a personal thank you to Bert Laux of Garrison who built her wood-mounted bells. “They chime Jingle Bells,” she said.

Locaparra is also known for singing along with the chimes. Her favorite tunes? “My favorite spiritual song is The Messiah,” she said. In stark contrast she lists Jingle Bell Rock as her favorite secular Christmas song.

Salvation Army spokesperson Major Doris Gonzalez said that funds collected in Cold Spring are used to help people in need in southern Dutchess and Putnam Counties. “That includes the working poor, the homeless and others going through hardship,” she said. “For a small community, Cold Spring contributes very generously.”

Locaparra will celebrate Christmas at home with her husband Richard, her five children and one grandson.

One thought on “A Familiar Face at Christmastime”