Brother Pius MacIsaac, who as a young man traded the corporate world for the life of Graymoor friar and a far-ranging ministry, died this Advent at age 84. 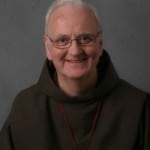 His order, the Franciscan Friars of the Atonement, announced his death, which occurred at the Holy Name Community in Ringwood, N.J., on Dec. 11, during Advent, the religious run-up to Christmas.

Born on Cape Breton Island in, Canada, the future Brother Pius attended school in Nova Scotia and took a job with the Dominion Steel and Coal Corp., before a call tugged him toward a different life and he arrived in 1955 at Graymoor, the headquarters of the Atonement Friars, in Garrison. He made his initial vows as a brother in 1957 and his perpetual vows in 1962. His ministry then took him to London, for an administrative position at the Catholic Central Library, where he later became guardian director.

On his subsequent return to the United States, he worked at the Chapel of Our Savior, Brockton, Mass., and then at Graymoor at St. Christopher’s Inn -– before crossing the Atlantic yet again to England to become assistant pastor at St. John Fisher Parish, in Rochester, Kent. In the 1990s, his ministry sent him back to Graymoor for a post with the Community Development Department’s planned-giving program, where his duties included visiting with benefactors, a role he enjoyed.

Until shortly before his death, he remained at Graymoor, where services and burial were scheduled for last week.