For more than one hundred years, the National Audubon Society has organized volunteers in the U.S., Canada, and Latin America to record sightings of birds between Dec. 14 and Jan. 5. Birdwatchers count all the birds they can find in local “circles” that are about 15 miles in radius to create a snapshot of how birds are faring. Ornithologists and conservation biologists use the data in research. This time of year is significant because it shows trends in migration and winter habitat. 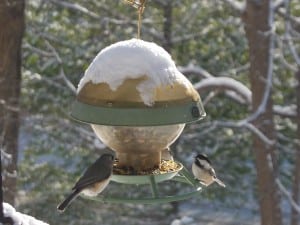 Volunteers in the count area can record sightings at their backyard feeders, too.
(Photo by P. Doan)

The Putnam County bird count includes parts of Philipstown and will take place on Saturday, Dec. 28. Charlie Roberto is the local contact and will be compiling the results. This will be his 30th year doing the count and the 59th year that a count has been done in Putnam County. Roberto said, “The first year I did it, I walked 18 miles in the snow with Ralph O’Dell, one of the first organizers of the count. Ralph still participates and I bet he could still walk 18 miles in the snow, but I couldn’t.” The volunteers are invited to a potluck dinner at O’Dell’s house in Putnam Valley at the end of the count to share stories and results.

The Christmas Bird Count is open to all levels of birdwatchers and citizen scientists. Volunteers with less knowledge and experience will be paired with a more experienced partner for a great learning experience. Volunteers can walk through areas or not do any walking at all and observe from cars or their backyard feeders if they live in the count area.

Volunteers can determine their level of involvement and activity and everyone will be given instructions about how to record their observations. Roberto said, “We record all the birds we see. Some people will be up at 4 a.m. to observe owls, others will just go out for a couple of hours in the afternoon, and then we’ve got some volunteers who will be out all day and do several areas.”

Technology has made the count easier in some ways. It used to be that if a team couldn’t identify a certain bird, they’d call for someone else to come see it. Now, when nearly everyone has a smartphone, birds can be photographed or even videotaped for identification purposes. Roberto said it can get competitive and as a team leader, he’s been called a drill sergeant.

“People enjoy trying to have the most sightings and part of the thrill of it is the possibility that you might encounter a bird that hasn’t been seen here before.” Roberto, who grew up on a small farm near Mahopac, balances his work in the fire department with his passion for protecting the natural world. He encourages people to volunteer because “if people don’t learn about it, they aren’t motivated to save it.” He also serves on the board of the Teatown Lake Reservation and teaches programs about the environment as well as birds.

In the many years of his involvement, Roberto noted that the Christmas Bird Count has shown historic changes in the habits of birds in our area. Migration patterns have changed with some birds, like the evening grosbeak, no longer coming south from Canada after it was seen here for 40 years then just disappeared. Other birds have extended their winter habitats further north. Roberto said, “We would never see mockingbirds, tufted titmouse or cardinals. Then with winter warming trends and more food choices like ornamental bushes with berries, those birds became regulars.”

Winter temperatures rose between 3.6 and 5.4 degrees in our area between 1970-2002 according to data from the University of New Hampshire and we’ve had significantly fewer days of snow cover. Climate changes worldwide have impacted the habitats of birds and everything about their lives, including breeding and migration and lead to significant species loss.

In Putnam County, Roberto remembers when he did his first count here and the area was mostly farmland. Now it’s more suburbs and woodlots. Even in Fahnestock State Park, which is part of the area surveyed, the trees and plants have changed dramatically. Invasive species have altered the landscape, and pests – like the woolly adelgid that has devastated hemlock trees – have impacted the diversity.

Locally, the efforts of campaigns like the Christmas Bird Count has led to positive changes, too. Roberto said, “This can make a difference. The bald eagles are a great example. Their numbers have really increased because we could draw attention to how they were threatened.”

To get involved in the Christmas Bird Count in Putnam County or to find counts in other nearby areas, check out the website and contact Charlie Roberto and other organizers there.