Santa has heard it all.

“Were you born on Christmas?”

“Is your last name Claus?”

“Is that really your name?”

A lifelong Cold Spring resident, Santa Warren usually smiles and explains that her full name is Santa Maria, that she was named after her Italian-American mother (although her mother had no middle name), and that she was born on the relatively uneventful date of January 29. 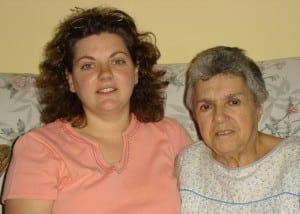 “My mother was 5 feet tall, and I am 5’3”, but she was always Big Santa and I was Little Santa,” says Warren, who is familiar to many residents of Philipstown because of her volunteer work for local youth soccer, the Haldane PTA and Our Lady of Loretto.

Warren, 43, who doesn’t have siblings, says it was tough having the name as a child because of the teasing from classmates – she didn’t name either of her daughters Santa (Sarah, 17, Sydney, 10, and Seth, 14, all attend Haldane). But as an adult she loves being called Santa, even with its unique burden – everybody remembers her name even when she can’t remember theirs.

She says a few people over the years have told her they know someone else named Santa, “but more often they think they misheard me, and they repeat it back as Sandra. If I don’t think I’ll ever see them again, rather than explain, I just go with Sandra.”

Santa is not the only Santa in town. At one time there were three – Warren, her mother, Santa (Frisenda) Huston, who died in 2007, and her mother’s cousin, Santa Maria (Frisenda) Ferrara, 91, also a lifelong Cold Spring resident. Both cousins were named for their paternal grandmother in Italy, Santa (Castrovinci) Frisenda.

Ferrara, who grew up in Cold Spring in the 1920s and 1930s, says she didn’t get much grief about her name, in part because her parents were immigrants. “We didn’t have too many friends” outside of the local Italian community, she said. 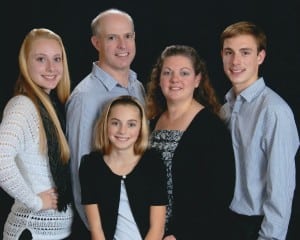 The male equivalent is Santo, although Warren says she gets plenty of junk mail for Mr. Santa Warren. The male Santa familiar to Americans is thought to originate with the Dutch tradition of Sinter Klaas. The name appeared in print in the U.S. as early as 1821, in an obscure poem that begins, “Old Santeclaus with much delight … ”

Warren jokes she could have married someone named Claus instead of her high-school sweetheart, Scott Warren. And Santa Santa was also a possibility, as more than 2,000 people in the U.S. have that surname and surely have grown weary of the Christmas Eve phone calls.

One thought on “The Santas of Cold Spring”