On Saturday, Jan. 11, Butterfield Library will celebrate New Orleans through those things closely associated with that most idiosyncratic of American cities: food, drink and music. In an evening designed as a fundraiser for Haldane’s senior class trip, The Big Easy party proceeds will help take most of these students to the Big Easy in March. 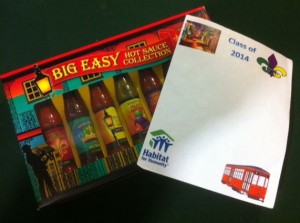 The charm, enchantment and culture of New Orleans will transform Butterfield Library for Haldane’s Class of 2014 The Big Easy fundraiser.  (Photo by A. Rooney)

Families will supply an assortment of Louisiana-themed foods, which will likely include gumbo, red beans and rice and jambalaya as well as dessert, accompanied by wine, beer and other beverages. Bottles of hot sauce at every table will spice things up. Cold Spring’s Leo Sacks will provide a compiled-for-the-occasion of New Orleans music, past and present.

There will be door prizes, including a framed print from the New Orleans Jazz Heritage Festival, a farm dinner for two from Glynwood Farm, and the drawing of a raffle with goodies including an iPad, tickets to a Broadway show and dinner at Sardi’s, Hudson Valley Shakespeare Festival tickets and tickets to the show Memphis at West Point’s Eisenhower Hall. In the spirit of the French Quarter, Whistling Willie’s will donate a portion of drink sales from pre- or post-party bead-wearing revelry to the fund.

While the relatively high cost has not deterred a majority of students from committing to the five-day journey, fundraisers such as this one – with profits going to a general fund to be distributed among all of the students – help defray the expense. The trip itself consists of a service-learning component, with students working with Habitat for Humanity, and another service organization, on projects connected with the ongoing rebuilding of the hurricane-devastated city.

Along with two full days of work, students will also tour the city and visit the swamp habitat nearby, immersing themselves in a place very different to what most have been exposed to growing up in the Hudson Valley. That was the driving force behind the idea itself, bringing it to fruition, according to Maya Curto, one of the seniors and last year’s class officers along with Mary Callaghan, John Hughes, and Shauna Ricketts. Curto recalls:

From freshman year onwards we brought up different ideas for a trip. We knew there was still a lot to be done in New Orleans, and that Habitat for Humanity was a trustworthy organization. That spurred us on. Though at first we didn’t think it would end up happening, we started researching and came up with a lot of information. This past summer, we met with [Haldane teacher, who supervises many of the senior year activities] Mrs. Pidala, who wasn’t sure, but when we actually put the community service details in place she agreed to it — if we worked for it. The major turnoff was the cost, but we knew if we could put as much work into getting it approved, we could put just as much work into fundraising because we wanted to have everyone have the option to go.

Aware that there has been some questioning from the community as to why the students need to travel so far when Habitat for Humanity works nearby, including Newburgh, Curto said, “It’s not just about doing the community service work. The exposure to another culture, even in the U.S., is just as important.

Cold Spring is a secure community and a lot of kids here have never really been out of it; for a lot of people this will be their first time going on an airplane. We wanted to experience something totally new and different. It will give us a whole new understanding and perspective by doing it in New Orleans.

Curto hopes that, if this trip goes well, it, or something similar, will become a new tradition for Haldane’s graduating class. “We hope it continues; a different class might take up something new, or might repeat what we do — it’s up to them.” Curto calls herself surprised at the “enthusiasm of everyone in the class towards this trip. It has amazed us; we didn’t think so many kids and families would be willing to put all this time and effort into it. It’s been a great surprise.”

Tickets to the Big Easy fundraiser, which runs from 7 to 10 p.m., cost $50 per person and can be purchased online at haldanemardigras.eventbrite.com, or RSVP to [email protected] and pay at the door. For more information phone Kathy Curto at 914-714-9309.