Continuing its monthly First Friday Play Reading series, World’s End Theater (WET) will present John Guare’s popular work, Six Degrees of Separation, at 8 p.m. on Friday, Jan. 3, at the Philipstown.info/The Paper meeting space at 69 Main St., Cold Spring. Andre Herzegovitch directs the reading. As with all in this series, the readings are free, with a suggested donation, and seating is on a first-come, first-served basis. Performances often fill quickly. 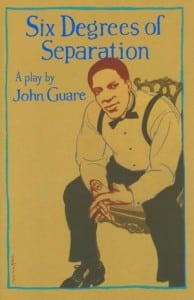 Inspired in part by real-life con man David Hampton, John Guare’s Six Degrees of Separation was written in 1989 and concerns Manhattan socialite-art dealer couple Ouisa and Flan Kittredge. They are visited by Paul, a young black man who claims to be the son of Sidney Poitier, and entices the couple with dreams of stardom in the movies.

Paul’s abrupt departure and a discreet manhunt lead to the realization that they are not the only ones affected by him. Family and friends have also encountered this stranger with similar results. By trying to connect the dots, Ouisa soon begins to question her own connections and identity.

This lyrical tragicomedy of race, class and manners explores fraudulence on many levels: opportunism, white liberal guilt, greed, the art world, and the elevated aesthetics of New York City with knowingness and compassion and a wonderful flow of language.

The original cast included Stockard Channing as Ouisa, John Cunningham as Flan, and James McDaniel as Paul. Swoosie Kurtz and Kelly Bishop moved into the lead role of Ouisa later in the show’s run, and Laura Linney made her Broadway debut as a replacement for the role of Ouisa’s daughter, Tess.