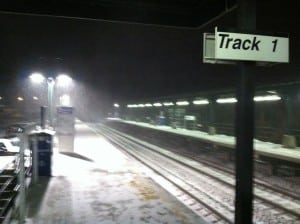 The scene at Garrison Station at 7:30 p.m. on Thursday, Jan. 2 (Photo by Charlotte Rowe)

Governor Andrew M. Cuomo today declared a statewide state of emergency as a major winter storm has already started to bring heavy snow, sub-zero temperatures and high winds across New York State. A state of emergency mobilizes resources to local governments that otherwise are restricted to state use only and allows the governor to suspend laws and regulations that would impede rapid response.

The governor urged New Yorkers to avoid traveling and stay inside their homes until the worst of the storm has passed.

“As this winter storm unfolds, bringing heavy snow and high winds to many parts of the state, I strongly urge all New Yorkers to exercise caution, avoid travel, and stay indoors,” Cuomo said. “To ensure an effective and rapid response to this winter storm, I am declaring a statewide state of emergency, so resources can get to communities where they are needed as quickly as possible.”

Part of the executive order included closing the NYS Thruway (I-87) south of exit 24 and I-84 in New York State, which runs across Putnam County from midnight until 5 a.m. I-84 is already closed to commercial traffic.

Beginning at 8 p.m. Metro North will have hourly service.