It’s below freezing this winter in downtown Cold Spring, but Barbara Perkins stands barefoot in Butterfield Library. Though it’s cold outside, she’s warming the building with positive energy and inspiration. Perkins is about to begin to energize a group of students as the leader of a qi gong and tai chi class designed for adults. 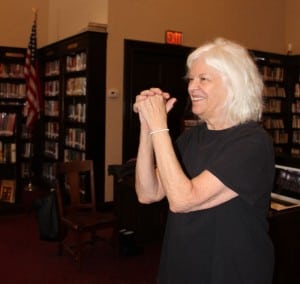 In her qi gong (pronounced CHEE-kung) and tai chi (TIE-chee) classes, the 75-year-old shares a youthful excitement with those who’ve gathered to learn and practice with her. According to the Mayo Clinic, qi gong and tai chi are traced to ancient Chinese tradition. With the qi gong self-paced system of stretching and gentle exercises, Perkins strives to foster a non-competitive experience that promotes health maintenance and enhances a long list of wellness benefits.

“Chi is nature’s force,” Perkins said as she welcomed her students to the class. “It’s universal. It’s cosmic and everyone has it. To feel the chi, you put your hands straight out in front and put your mind in the center of your hands, and first relax.”

A resident of Cold Spring, Perkins calls herself a teacher rather than a master, but has been practicing the movements for nearly 12 years, nine of those years with Gary Renza of Fei Lung Martial Arts in Cold Spring.

To help channel the flow of the chi, life’s energy, she reviews 12 energy points, beginning with Bai Hui (pronounced BY way), the indent on the crown of the head.

“When we do tai chi,” she said, “we try to get the energy points to line up.”

“This is Lifting The Sky,” she announced. Standing face-to-face with the students, Perkins demonstrated the postures in slow but fluid movements.

“For health and healing, that is the king of all movements,” she said. “It’s for arthritis and regeneration and the next one is for rejuvenation  – Carrying the Moon.”

Perkins makes each exercise look easy, but she’s encountered many hurdles on her journey to wellness. At the age of 64, with low bone density, she had already had two hip replacements. She was suffering from back issues and was told to anticipate life assisted with a wheelchair within 10 years. A decade ago, the woman leading this class,  with delicate but powerful hands, couldn’t make a fist due to her arthritis. Osteoarthritis and osteopenia were presenting themselves in debilitating forms, and chronic fatigue syndrome further complicated her health and wellness. 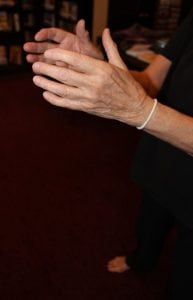 “This is when I decided I needed to do something so I went back to tai chi,” Perkins said. “My health improved for a short while. I stayed in Fei Lung studying martial arts, mainly tai chi, which is a qi gong form, for nine years. My arthritis improved, I am not in a wheelchair, and my hands and feet were better. However I knew there was room for improvement and I turned to qi gong that is more specifically for health – regeneration, rejuvenation. It clears the blockages so the chi can move smoothly through the body.”

Perkins welcomes students of all abilities. Galelyn Williams of Cold Spring has learned qi gong and tai chi with Perkins, and makes the moving meditation part of her regular routine.

“I started with Barbara and I took to it quickly,” Williams said. “It just clicked. I love Barbara and she is my master.”

The classes combine physical movement, breathing and meditation, and are intended to improve balance, lower blood pressure and improve the ability to focus. Participants, including people with back and joint pain, should consult their healthcare providers before beginning any new exercise program.

The qi gong and tai chi classes resume Jan. 9 at Butterfield Library. Philipstown boasts a wide range of opportunities to get moving in the new year to promote health and wellness. Local churches, civic groups and schools sponsor a variety of exercise and fitness classes. The Philipstown Recreation Department also administers a tai chi course as well as a broad selection of other programs including yoga, Pilates, Zumba, Yamuna body rolling, volleyball and basketball. From yoga to spin classes, walking to hiking, the community offers many avenues to get moving and maintain an active lifestyle.

“Movement is for your health,” Perkins said as she demonstrated a qi gong exercise. “Do one thing – just Lifting The Sky. Once you get it, you don’t ever want to let it go.”

One thought on “Meditation in Motion for the Mind, Body and Spirit”