In response to those in the community who have wondered why the class of 2014 is heading to New Orleans for a service trip: New Orleans is a remarkable city, which has organically come about as cultures have merged together. I think the city itself is going to give us a fresh perspective on how people can come together despite their differences (specifically when faced with the common crisis of Hurricane Katrina). I could not be any more excited to get my hands dirty in the city which so many people have influenced: musically, linguistically and culturally. 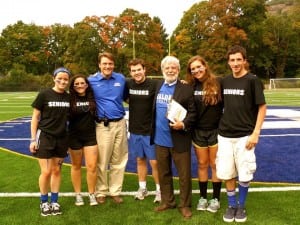 As cliché as it sounds, ever since freshman year my class has dreamed of a unique senior trip. We have always been motivated as a class to leave our mark on not only Haldane, but the world. The journey of the trip’s approval would have steered many other grades away, but we didn’t panic, instead we continued to push our idea forward. With all of our efforts to make this trip happen, came the beautifully overwhelming support of our community. I was pleasantly surprised to see so many enthusiastic parents and students. Their powerful words of encouragement provided the motivation to make this trip happen! I really appreciate the community’s warm embrace of our trip. Thank you so much to everyone who believed in our vision.

One of the goals for this trip was to make it completely accessible to any senior who wished to attend. Back in August, I promised the Board of Education that I would strive for 100 percent student participation for this trip no matter what it took. Fundraising was a major objective in order to achieve maximum participation. We began raising money for our senior trip throughout high school. If you are a regular Foodtown shopper I am sure you have seen us on a Saturday selling brownies and cakes with a smile. We have developed a point system which rewards the students who work and bake for each bake sale. Our class has also participated in several chocolate-bar fundraisers, a raffle and a successful tag sale. Through this process I have learned that if you are willing to put in the time, the payoff is tremendous.

I would love for this trip to become an annual senior trip, but I would respect the decision to travel to another destination. I think that no matter where the future seniors end up going they should maintain the same concept of service learning. I think that giving back to other communities is a great opportunity for Haldane students to impact the world in a positive way!

I am beyond thankful for the opportunity to bring a little piece of Haldane to New Orleans.