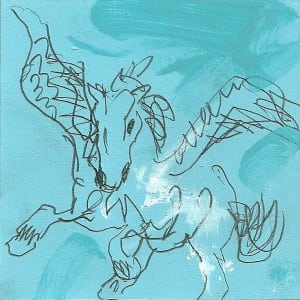 “Edgeponies” by James Westwater is on view through Feb. 2.

Best known for his 15-year meditation on a single geometric form, a parallel-sided oval or pill shape, Westwater has been painting another Hard-edge series, the more rarified Edges, even longer. Begun in the 1990s as a purely geometric exercise, Edges has taken on multiple meanings.

These rigorously executed paintings feature thin, parallel bars along their outer edges. They are about the edges of perception, geographical boundaries and limits, the edge of plausibility, and going to the brink.

Finding Pegasus, the “ponies” part of the coupling, is a series that Westwater began in September 2013, while an artist-in-residence at Foundation OBRAS in Evoramonte, Portugal. A sprawling and ambitious body of work, involving found objects from rural Portugal, appropriated and modified paintings, photography, and works on paper that feature the eponymous mythical winged horse, Finding Pegasus is a freewheeling counterpoint to the more contained and intellectualized Edges.

Edgeponies is Westwater’s third solo show with curator Carl Van Brunt. The first two were in Van Brunt’s Beacon Galleries in 2008 and 2010. A former resident of Beacon, Westwater now lives and works in College Station, Texas, with his wife and their dog. Mad Dooley Gallery is located at 197 Main St., Beacon. Call 845-702-7045.