It was business as usual for Haldane Superintendent of Schools Mark Villanti at the district’s board meeting Tuesday (Jan. 7), but the occasion marked his final meeting before his impending retirement.

Agreements with two of the school district’s three bargaining units, the Haldane Administrators Association and the Haldane Civil Service Employees Association, were approved. Trustee Peter Henderson termed the contracts “excellent agreements” for both the associations and the community. “Our goal was to stay within the tax cap and avoid layoffs.

Through these agreements we were able to meet those goals,” he said. Henderson said that the agreements recognize the new economic “normal,” adding that, “Life within the [tax] cap is not going away soon.” Villanti told The Paper that with salaries and benefits making up almost 80 percent of the district’s budget, and the school district tied to the state-imposed tax cap, both associations “recognized the dilemma we’re in.”

He said the agreements both call for increases of 1.5 to 1.6 percent per year. The agreements, which are posted on the Haldane website, run from July 2014 through June 2016. The contract with the teachers’ union is not yet settled.

Trustees took time out from their regular business to honor a number of students. Haldane senior Giana Grandetti received the Putnam-Northern Westchester BOCES Student of Distinction Award, bestowed upon only one student from the 18 member school districts. Grandetti, who is in the BOCES culinary program, was also a member of the 2013 girls varsity soccer team.

The 2013 fall season was an excellent one for Haldane’s student athletes and members of four teams received certificates honoring their accomplishments. The girls varsity volleyball team won the Class D State Championship while the girls varsity soccer team made it to the state final. The boys and girls cross country teams also both competed in state finals.

Varsity girls soccer was one of four teams honored for the 2013 season. (Photo by M. Turton)

Haldane High School earned honors with a spot on the 4th Annual AP District Honor Roll. With more than 20,000 high schools across the U.S. and Canada, Haldane was one of just 477 to achieve Honor Roll status. Recipient schools are recognized for increasing access to AP programs while also increasing the number of students who earn a score of three or more on AP exams. Students earning those grades are considered to have completed college level work. 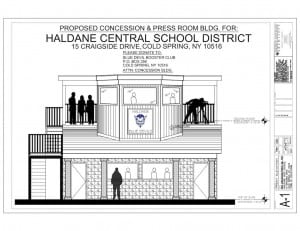 With the new athletic field in place since September, attention turns to fundraising for a new concession stand and viewing area to be located next to the field. The Blue Devils Booster Club’s Dan Hughes and Roger Hoffman presented plans for the proposed two-story building. Hoffman, an architect, contributed the design. Hughes said the building will cost approximately $144,000 and that the club has already raised about $30,000.

The initial phase of construction will cost $45,000, an amount he said is less than expected because two local contractors have offered discount rates to complete the work. Cost savings will also be realized because no cooking will take place inside the concession building, being done instead on outdoor grills.

Trustees received notices from three teachers who have announced that they will retire by the end of the school year. The retirees include teachers Ginny Pidala, who has taught at Haldane for 36 years, and 18-year veteran Mike Klubnick. Christine Donovan, a teaching assistant for the past 10 years, will also retire.

Haldane will have a role to play a role in approving plans for the Manitou School proposed for the Plumbush Inn site on Route 9D near Cold Spring. The private school plans to offer K-8 instruction beginning with K-4 next year. While the new school must be approved by New York State Department of Education, Villanti said that the Haldane District’s role will be “to determine that the facility is safe and that the program is equivalent, but not identical, to a public education program.”

Donations were announced at the meeting. Christine McCoy, branch manager of M&T Bank in Cold Spring, presented a check for $2,500 for the athletic field project. And fall 2013 grants from the Haldane School Foundation totaled $39,587 towards a wide variety of programs.

Haldane School Board President Gillian Thorpe reported that interviews with six candidates for position of superintendent of schools will begin soon. Villanti concludes his duties Jan. 17, when John Chambers takes over as interim superintendent. The full-time superintendent will take the helm in July. Villanti’s tenure as superintendent began in July 2007.

Early in Tuesday’s meeting, a brief video was presented in which numerous staff, from maintenance workers to teachers and administrators, said goodbye to Villanti, universally praising him for his leadership and human touch. At the end of what was his last public meeting, he asked if he might also have the last word. Always a staunch and at times emotional defender of public education, Villanti ended his final board meeting by simply saying, “Parting is such sweet sorrow.”