Putnam County legislators Tuesday (Jan. 7) demonstrated the limits of party dominance when the largely Republican legislature split over election of a new chairman and took four rounds of voting to finally settle on someone – District 5 Legislator Carl Albano.

On another contested move during its yearly reorganization meeting, the legislature filled a vacancy in District 3 with a former legislator and Kent town councilman who failed to win re-election to his town board two months ago. 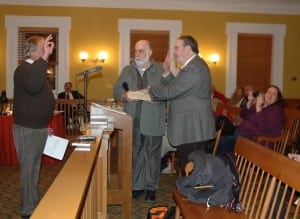 The new District 3 legislator, Louis Tartaro, recommended by Kent’s Republican committee, will fill out the remainder of the term, ending Dec. 31, of ex-Legislator Richard Othmer. Othmer’s resignation to become Kent’s highway superintendent not only prompted the search for a new legislative chairman, since he had served in that capacity, but forced a decision on how to handle the District 3 vacancy. Options included leaving the seat empty, for voters to fill in November.

With no chairman available, Putnam County Clerk Dennis Sant presided over the opening of the meeting and urged the eight legislators to pick Othmer’s successor. But since Tartaro’s appointment had not yet occurred, they deadlocked.

All legislators are Republicans except Oliverio, from Putnam Valley, a Democrat who also has run as a Conservative. He proposed LoBue for chairperson. Her nomination drew yeas from Oliverio, LoBue herself, Gross, and Wright, and nays from Albano, Castellano, Nacerino and Scuccimarra.

Consequently, Sant suggested the Republicans convene privately to resolve their differences. But having gathered behind closed doors earlier they eschewed further discussion.

Because “we seem to be at a stalemate right now,” Oliverio nominated Gross as a compromise. The motion garnered four votes: Oliverio’s and those of LoBue, Wright, and Gross himself. But Albano, Castellano, Nacerino, and Scuccimarra voted “no.” Thus the stalemate continued.

Sounding exasperated, Sant again invited the Republicans to caucus “and see if we could come up with a decision. We have a lot of work to go through tonight. We’ve only been here five minutes and we already have a roadblock. This is really all about the people of Putnam County, who put you into office” and who, he implied, want the legislature to avoid bickering and address serious matters.

Once more the Republicans rebuffed him.

When Oliverio repeated his attempt to make Gross chairman, Sant declined to call another vote and proposed, for the third time, that the Republicans confer to make peace among themselves and “help move this along.” For the third time, they refused to do so.

Sant next brought up the District 3 vacancy. Albano nominated Tartaro to fill it.

Oliverio requested they “keep the spot open for the [term’s] remainder,” citing numerous pleas from Kent voters “who feel this should be a straight run, candidate against candidate, 10 months from now.” Choosing Tartaro “is a very controversial move and the push-back from the constituency will be great,” he said.

LoBue also objected. “I’m breaking ranks,” she said. “I just can’t circumvent the will of the people.”

Albano advocated action. “We’ve been here five or 10 minutes and we’re already in a deadlock. We’re not going to get anything done” without a ninth legislator as a tie-breaker, he said. “I think it is important that we fill this position and move on and get our work done.”

They then approved Tartaro’s appointment with only LoBue and Oliverio voting “no.”

Tartaro claimed his place on the dais and Castellano re-nominated Albano as chairman. This time Tartaro joined Castellano, Nacerino, Scuccimarra, and Albano in voting “yes,” while LoBue, Oliverio, and Gross said “no” and Wright abstained.

“May God be with you in your wisdom,” Sant remarked as he turned over the meeting to Albano.

The legislators voted 6 to 3 to name Nacerino as deputy chairperson, with LoBue, Gross and Oliverio again the dissenters.

LoBue protested that the move to change their status came “outside the budget cycle,” not during budget preparation.

Wright disagreed, asserting that “it’s not legislatively honest to say it doesn’t have a fiscal impact going forward.”

“It’s not ideal to do it this way” but involves “a mistake that came to us. And I think we handled it in the right fashion,” Castellano said, noting that the two employees would receive vision and dental benefits but not health-care coverage.

The legislature then approved the duo’s appointment, with only Wright and LoBue voting “no.”