While a recent profusion of new business has diversified Beacon’s landscape, an established art scene is what continues to distinguish the city from others in the Hudson Valley. Last year, large cultural events like Second Saturday, Open Studios, Riverfest and Beacon Independent Film Festival worked together with new eating, drinking and retail establishments to enhance the city’s profile as a place to call home as well as a destination.

To ring in the New Year and a new season, Philipstown.info/The Paper surveyed members of Beacon’s creative community for a preview of what lies ahead in 2014. Here is a sample of their responses.

“Each year’s iteration of Beacon Open Studios acts as a ‘coming out party’ for the newest creative talents here,” said Dan Rigney, President of BeaconArts.org. “The Beacon Independent Film Festival (BIFF) set a high bar for their first time out. We’re looking forward to seeing how they top themselves this year.”

“I started Beacon Open Studios in 2009 because I wanted to establish a venue for visual artists to introduce their work to a wider audience and where the community could meet us in a casual setting,” said Theresa Gooby, an artist and the organization’s director. “Now, other types of artists want to be involved. “We’ve had inquiries from performers and craftspeople, and we are going to add film and video screenings this year. There is so much inspired energy in Beacon now. It’s a wonderful cacophony of creativity.”

The 5th annual Open Studios event is scheduled for the weekend of May 3-4.

Christopher Albert, an artist who has lived in Beacon for 10 years, sees a need for more places to view art. Although he recognizes Mad Dooley and Matteawan as promising new galleries on Main Street, Albert believes the ebb in Beacon’s visual art ecosystem is still in play. Despite a thriving population of talented artists living and producing quality work here, the number of working galleries remains small. “Perhaps it’s a testament to what this place has to offer as an incubator for visual art more than a stage for viewing it.” 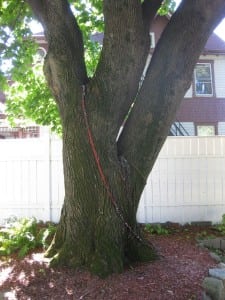 Albert has curated an exhibition project that began last October and will continue throughout 2014. Titled Crotch, the project is located in a tree in the artist’s backyard. Manhattan-based artist Matt Stolle’s project, Black Ball, is occupying the tree for the month of January. Visitors are welcome to come to the site, by appointment, or view the work anytime during daylight hours via webcam.

Albert, who is also an arts journalist and hosts an Internet radio show, is more enthusiastic about Beacon’s burgeoning music scene. “It’s here where we have something to look forward to in the coming year. It has a more vibrant pulse right now and I only see that getting stronger,” he said.

Indeed, opportunities to hear music in Beacon seem to have multiplied almost overnight in an already lively scene. The openings of Towne Crier and Quinn’s late in 2013 complement programs in other venues, including Dogwood, Max’s on Main, Bank Square Coffeehouse, and concerts presented by Local 845.

“I wasn’t running a music school when I started Riverfest,” said Stephen Clair, director of Local 845, in answer to why the free outdoor music festival is going on hiatus in 2014. “It has made for a vision a community like this can get behind and it’s been a thrill to grow it and watch it grow. Last year we saw 14 bands on three stages with 3,700 people in attendance. But it’s taxing on me and my family.”

Clair will continue to run Beacon Music Factory, with its classes for all ages and popular Rock Band Boot Camps already set, and multiple dates in place for In The Pines, a “boutique mini-festival” held at University Settlement Camp.

As always, the Howland Cultural Center offers concerts and music programs almost every night of the week, including an Open Mic at 8 p.m. on Friday, Jan. 17, and a Gospel Café at 7:30 p.m. on Sunday, Jan. 25. 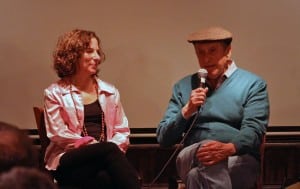 Cindy Kleine and husband, Andre Gregory, at a Beacon Film Society screening of Kleine’s documentary, ”Before and After Dinner” (Photo by David Majzlin)

“Our educational offerings at Studio B and the new Studio B2 at The KuBe Collective (located at Ethan Cohen’s Kunsthalle Beacon) have expanded,” said Christine Vittorini, Executive Artistic Director of 4th Wall Productions / The Beacon.

Film events are also on the rise, by way of The Beacon Independent Film Festival (BIFF), an annual 3-day film festival, the Beacon Film Society, a grassroots cinema club, and The Beacon Theatre. The Howland Public Library has been presenting monthly “International Film Nights” since last year.

Echoing Albert’s sentiments in regard to the visual arts, Terry Nelson, founder of BIFF, predicts re-invention to be a big thing in 2014. “Some of us are facing career challenges. Do we want to create or observe?” he said.

This question led Nelson to launch the festival last year. “We were honored to make a contribution to the Hudson Valley film community and pleased that we had such a wonderful turnout,” he said. “ We are heavy into planning stages for the second year and have several pre-festival events planned for the coming months.” 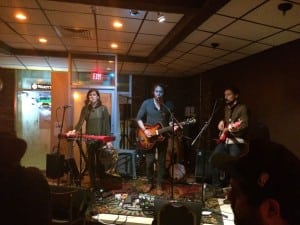 “This year will bring opportunities to continue the growth of the city’s cultural scene,” said David Majzlin. A composer who calls Beacon home, he started the Beacon Film Society in 2012 as a way to connect with other local cinephiles. “That there are so many great events being produced here reflects a community that is actively seeking and supporting the kinds of art they are into, and this can stimulate local economy as well.”

The Beacon Theatre’s nascent Beacon Film Festival – Freeze Frame – is moving to March in 2014 to avoid the weather-related delays and cancellations they experienced last year in February. “Also, people keep asking us to make our special movie nights a regular weekly event, so we will be showing more films,” Vittorini said.

The second annual Beacon Independent Film Festival is slated for Sept. 12 through 14 at Beacon’s University Settlement Camp. The next presentation at the Howland Library is the Scottish film, On A Clear Day, at 7 p.m. on Friday, Jan. 25. The Beacon Film Society hosts monthly screenings at Dogwood, free of charge. Their next film is not yet confirmed.

Some citizens of Beacon are closely monitoring development, using cultural programs and commentary to address expansion and to provide thoughtful, holistic solutions.

“Our vision, projects and endeavors for Beacon are based on the understanding that for any city to be sustainable and resilient, a critical mass needs to be in place and operable in a smart manner,” said Lily Zand, an architect and owner of School of Jellyfish, a design house for the advancement of sustainable living. Its “Good Things Happen Here” and “Parametric City” public space initiatives are ongoing campaigns that facilitate interaction and exchange of data pertaining to the city’s development.

With more business comes increased traffic, a chief concern of Stowe Boyd, editor-in-chief of BeaconStreets.com. “Main Street is the heart of Beacon and our greatest asset. We should be pushing, at the minimum, for a 20-mph speed limit and restrict through-traffic of commercial vehicles. Making the street more pedestrian and bicycle friendly should be a central policy for the City Council and the mayor, as both a key to future development and making Beacon better for residents and visitors.”

Mark Roland is a Beacon resident who writes about expanding home economies at the local level for his blog, wigwameconomy.com.

“Renewing Beacon’s locally-owned manufacturing base is a key ingredient in creating a more resilient economic future. I would submit beer and glass as the frontrunners,” he said. “We have established glassmakers Niche Modern, Hudson Beach Glass and Malfatti Glass all producing within city limits. 2 Way Brewing Company, a micro-craft brewery, is set to open later this winter and Beacon Homebrew just opened across the street from Hop Beacon. I propose a New Year toast to the soon-to-be Hudson Valley capital of beer and glass!”