The potential for new land-use controversies hangs over Philipstown: A team led by part-time residents-cum-developers wants to construct a leisure village off Route 9 and Horton Road, on a site where soil mining plans prompted intense debate in 2012.

Called Hudson Highlands Reserve, the proposed complex features 24 residences intended as week-end family homes, an equestrian center, and park areas open to the public. Also bounded by East Mountain Road North, with wetlands and Clove Creek running through a corner, the property lies on the western side of East Mountain and is conceived as a conservation subdivision under the town’s 2011 zoning law. A conservation subdivision concentrates buildings in one part of a property, leaving the rest undisturbed.

The 136.5-acre tract is zoned rural residential, and in part, industrial-manufacturing, with soil mining, aquifer, and open-space conservation (OSO) overlay districts. Zoning law demands that at least 60 percent of land in a conservation subdivision be kept as open space, an amount that increases to 80 percent for OSO areas. 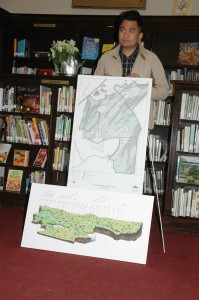 Anthony Sunga, of Uli + Associates, displays subdivision drawings to the Planning Board. Photo by L.S. Armstrong

The project came into view Thursday night (Jan. 16) at the Philipstown Planning Board’s monthly meeting, in an initial submission by the Fractal Group LLC and Uli + Associates, which share a New York City address with Horton Road LLC, the owner of the tract. Horton Road LLC is owned by the David Isaly 2008 Trust, managed by Christina Isaly Liceaga, wife of Hudson Highlands Reserve architect Ulises Liceaga and sister to David Isaly, whom Ulises Liceaga termed “the guy with the money” in the venture.

Ulises Liceaga told the Planning Board that he and his wife acquired land on East Mountain Road North 14 years ago, built a house, and now with their five children live there on weekends while otherwise dwelling in New York City. “Avid horseback riders, we looked for a place to have some horses” and began envisioning Hudson Highlands Reserve, he said. Horton Road LLC acquired parcels from Lyons Realty, the firm involved in the soil mining plans; Rodney Weber, and Joseph and Denise Frisenda in a series of transactions between May and December 2013.

“We love the community. We love this place,” Liceaga said. “We are trying to use a set of environmental strategies, a passive-house” approach, in the development.

According to documents filed with the Planning Board, part of the property still has “a standing permit for a mining operation. Rather than pursuing the mine, we propose a residential subdivision consistent with new open-space development guidelines” found in the 2011 zoning law, said the Fractal Group principals. “Such an endeavor would overcome any negative impact to the community associated with mining and encourage responsible long-term growth for the area.

Furthermore, the new subdivision will target the second-home market that will use the property as a family-weekend home.” The houses would have rooftop solar panels, capture rainwater for gardening and flushing toilets, be integrated into the landscape, and use a community treatment facility that takes in waste-water and returns it to the land clean, Fractal Group LLC wrote.

The company further stated that “land reserved for conservation will be open to the public with new parks, gardens, and trails for community use, to be managed by a homeowners’ association.” Fractal Group describes the property as “moderately hilly” with a slope of 20 percent or more on 43 percent of the total site.

“It’s a big project,” Philipstown Planning Board Chairman Anthony Merante observed as the board began its review – likely to be an involved process.

Planning Board Member Kerry Meehan informed Liceaga that “you’re the first to come through with a conservation site plan. So you should have a lot of fun.”

Not yet clear are the subdivision’s possible effects on the Haldane Central School District and school taxes should new owners use their houses as permanent family homes and not merely for weekend stays; the emergency services network, including fire protection; the area road infrastructure, and more.

Ron Gainer, Planning Board consulting engineer, pointed out that the applicants face substantial work ahead in augmenting their basic scheme and pulling necessary items together and that along with the town government, Putnam County and New York State Department of Environmental Conservation have interests in the project. He promised Liceaga to “start to walk you through” the requirements.

The concept “all looks very interesting,” Susan Jainchill, the board’s planning consultant, commented. With everything at an early stage, “there’s a lot to say and not much to say at this point,” she added.