I’d rather not write about meat. It’s not that I’m against it; I’ve never been vegan or vegetarian – not even briefly in high school, when many of my friends grew passionate about such dietary philosophies. On the other hand, I would not go out of my way to describe myself as a carnivore, either. Those massive, macho steaks served up in certain old-school restaurants alarm me.

So why am I writing about meat? Because I have a whole lot of it in my life at the moment – some 50 pounds of it, to be exact. Moreover, it is my job to see to it that this meat is transformed over the course of the next 48 hours into enough beef stew to serve the attendees of MAD Science night at the Garrison School. (MAD is an acronym for Moms and Dads, by the way, and not a reference to how said parents will feel about spending a weeknight in the school gym.) I am not cooking alone, thank heavens; with me in the kitchen will be a top-notch team of women, all of whom I adore. Still, the success or failure of the stew feels like my responsibility.

So even though I tried writing about something else this week – something pleasant, like cauliflower, or bracing, like dandelion greens – this massive quantity of beef sat on my thoughts like Ferdinand the Bull, refusing to budge. 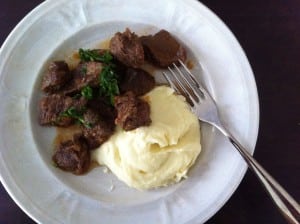 Therefore, meat it is. And meat is complicated. Everyone has an ideology about it, whether or not they know it, the same way that we all have some sort of belief about God, even if it amounts to indifference or renunciation. Moreover, we all think that our own meat-ideology is a little more upright and honorable – or at least down-to-earth and sensible – than that of our friends and acquaintances.

I mean, of course we do: that’s why we believe in ours and not theirs.

And we are unlikely to change each others’ minds.

For what it’s worth, here’s mine: I recognize that animals are part of the life cycle of healthy, biodynamic farms, just as they are a part of the life cycle of every natural ecosystem – albeit a much smaller part than plant-based food. So I like the logic of applying a similar sense of proportion to my family’s diet: a lot of leaves, seeds, fruits, roots, and nuts, and a little bit of meat.

Doing so also means acknowledging that raising meat is much more energy-intensive than raising, say, lettuce, corn, or parsnips; meat is higher up the food chain. A healthy cow takes a lot of time, grass, effort, hay, care, and attention to grow – which is why, at the market, good meat costs a lot. It should. Meanwhile, the compromises required to create cheap meat are so detrimental to the welfare of the animals that I can’t justify the savings – any more than I could justify slave labor by saying that it results in cheap clothing.

Which is not to say that I don’t love a bargain, especially when I’m trying to stay within someone else’s budget. Luckily for my conscience and the PTA coffers (not to mention the attendees of Thursday’s scientific shindig), Glynwood happened to have 50 pounds of stew beef taking up much-needed space in their freezer, so they sold it to me for a song. Which means I get to feed my community food I believe in – beef that was raised on fertile pastureland right here in Philipstown. And that is something worth writing about.

Rebecca de Roche (who has been filling in as my Fairy Godmother of late) tipped me off to the existence of this recipe, which has great, deep flavor despite the fact that you don’t brown the beef first – a godsend when cooking for 200. I adapted this from one that originally appeared in Cook’s Illustrated. At GUFS, I made it with carrots and peas, and omitted the almonds, mushrooms, and most of the vinegar. “Picada” is a fresh pesto-like mixture you add just before serving.

1 cup water (plus more as needed)