Hudson Valley Hospital Center honored Nancy Montgomery, a Philipstown town board member and her husband Jim Lovell posthumously for their community service at a ceremony Thursday (Jan. 23) at the Cortlandt Manor facility on Crompond Road.

The ceremony, held in the center’s lobby, was part of the hospital’s 125th anniversary celebration, which features “125 acts of kindness” as its theme. Lovell, who died in the December Metro-North train derailment, and Montgomery were cited as Acts of Kindness Ambassadors for their service to Philipstown as both volunteers and in Montgomery’s case, a public servant. 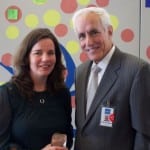 John C. Federspiel, hospital president, in presenting the award, pointed to the couple’s many community commitments. He mentioned Montgomery’s participation on the town’s recreation commission and her volunteer service in the ambulance corps before election to the town board.

“Nancy has a deep connection with older adults and was well known for this ability when she served with the ambulance corps,” said Federspiel.

Federspiel also referred to shared appreciation of music that included work on many productions at the Depot Theatre in Garrison. He acknowledged that Montgomery was more visibly active but said that after Lovell died Montgomery received “thousands of cards and emails telling of Jim’s deeds whether it was encouraging a child on the soccer field or volunteering at a school event. Jim told his kids every day as he kissed and sent them off on the school bus, always be kind and true and that’s what he was.”

Receiving the award Montgomery thanked the hospital, which she said had served her family well over the years. “Jim and I could not have done the things we did without the community, that was the force behind anything we did whether up front or behind the scenes,” Montgomery said. “My pledge today to Hudson Valley Hospital and all of you is to continue to be kind and true,” she said. 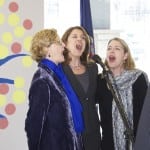 The hospital is encouraging pledges of kindness and after hospital executives posted pledges on a specially made wall of kindness audience members were invited to do the same.

During the ceremony two other awards were presented to Ellen Buccellato, a long-time Peekskill homeless advocate as well as an active participant in the hospital’s chaplaincy program, and members of the hospital’s Santa’s Helpers program, which presents toys to children in need at Christmastime.

Motherlode Trio, including Philipstown’s Stacy Labriola, Patti Pelican and Terry Platz, helped open the event with an a cappella version of The Star-Spangled Banner.