The closing of the Tilly Foster Farm Museum Jan. 31 leaves its owner, the Putnam County government, with the task of caring for the historic property and determining its future.

Located near Brewster on the county’s eastern edge (about 25 miles from Cold Spring), the site consists of nearly 200 acres, traditional buildings, and antique machinery. Until recently, it featured animals – from ducks, chickens and geese to rabbits, pigs and cows, with a donkey and horse, too. 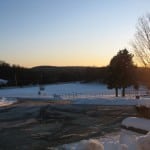 An equine presence could ostensibly return. Even as the farm in its present incarnation shuts, a county resident wants to bring ex-carriage horses to live out their days in its fields. And at least two county legislators think the idea is worth exploring.

In November, Preserve Putnam County, a non-profit organization charged with running Tilly Foster, revealed “with great sadness” its departure – five years into a 40-year lease – after months of complaints from the county legislature about the organization’s financial stewardship.

More recently, declaring that the rare-breed animals already “all have been sold,” managers thanked Tilly Foster’s supporters and bade “a heartbroken good-bye to all.” Preserve Putnam scheduled sales of office furnishings and farm equipment Jan. 18-19 and Jan. 25-26. However, it said that Avalon Archives, a rock-and-roll exhibit, would stay open, at least “sporadically,” despite prior questions about putting such a collection in a place supposedly dedicated to Putnam County’s agricultural heritage. Old agricultural equipment owned by the Putnam County Antique Machinery Association also remains.

In announcing the surrender of the lease, the Preserve Putnam board of directors (including Putnam County Sheriff Donald Smith and former County Executive Robert Bondi), said the organization would “assist the county executive and legislature in returning the farm to direct county control.”

A key Putnam County Legislature panel, the Physical Services Committee, put the matter on its Jan. 22 meeting agenda. District 1 Legislator Barbara Scuccimarra, who represents Philipstown and whose horse was foaled at Tilly Foster, said Wednesday before the meeting that the committee had to officially vote to let Preserve Putnam County end the lease. “If they want to get out, let them get out,” she recommended.

She said County Executive MaryEllen Odell intends to set up a task force to devise a plan for Tilly Foster going forward. Scuccimarra said the property would remain a farm. “There’s no plan to do anything other than leave it as it is,” she said, suggesting Tilly Foster would be ideal as an educational center and resource for small-scale agriculture and such practices as bee-keeping and backyard farming.

Legislator Sam Oliverio, of Putnam Valley, sent colleagues a letter from a Mahopac man who proposed that Tilly Foster shelter New York City carriage horses, since Bill de Blasio, the new mayor, plans to abolish the carriage-ride trade. “This will leave the beautiful animals needing a ‘retirement home,’” Oliverio wrote in a Jan. 9 memo to Odell. “Certainly there would be many details to be looked into and addressed, but I believe this idea warrants consideration.”

Scuccimarra said Wednesday she “would love to be able to do something like that” for carriage horses. “It’d be very nice for some of the older ones.” Nonetheless, she acknowledged that de Blasio’s views on ending the carriage business are controversial. She noted that before the county acquired the site, it was part of a horse-breeding operation, and earlier probably specialized in dairy farming.

Preserve Putnam County said it had “added infrastructure to the farm, including painting buildings that had not been painted in 40 years,” constructed fences, and “created a world-class museum of critically endangered Early American farm animals, when there was not a single animal on the farm when it took over.”

Moreover, the Whipples devoted personal time and skills to Tilly Foster and “additionally donated hundreds of thousands of dollars in meeting the shortfalls of the farm,” Preserve Putnam County stated. Preserve Putnam’s board kept admission free and said it was “very proud of its successful venture – and adventure – in its management.” 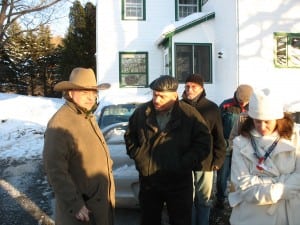 George Whipple, left, founder of Tilly Foster Farm, as he prepares to show Putnam County officials around the farm in 2008. Then county legislator,
now County Executive MaryEllen Odell, at right.

County legislators at a September meeting of the Physical Services Committee sounded less enthused about the Whipple-Preserve Putnam record, claiming that despite repeated requests they never received crucial financial information.

“Since 2009, he hasn’t been in compliance” with county requirements, District 8 Legislator Dini LoBue said at that meeting, referring to Whipple. She urged him to promptly “explain what’s going on there.”

“Enough is enough,” Richard Othmer, then chairman of the legislature added, suggesting the legislature demand a forensic audit of the farm’s books. “I want everything [scrutinized].”

Oliverio wondered about the Avalon music museum. “That farm was not made for a rock-and-roll hall,” he said.

Ann Fanizzi, a long-time Tilly Foster volunteer and donor, similarly criticized inclusion of the rock-and-roll collection in the old farmhouse, where she said it fills six rooms better utilized for telling the story of the farm. “For five years the residents of this community have been bereft” and “the Tilly Foster historical legacy has been erased,” she told the committee. Yet, she continued, under proper administration “we have a chance to make Tilly Foster a gem.”

Two months later, the Physical Services Committee again took issue with the Whipple-Preserve Putnam performance. The legislators said that although Whipple had finally sent a large packet of data, numerous questions still existed, while he ducked requests to come before the committee. According to draft minutes of the November deliberations, LoBue referred to the Whipple material as needing decipherment and Othmer likened it to the “Book of Kells” – an ornate early medieval manuscript.

The committee spoke of subpoenas and a member of the public expressed concerns about the welfare of the farm animals. LoBue, too, wondered about arrangements involving the livestock, which, she said, the county did not own.

In statements on the lease relinquishment, Preserve Putnam said it had “filed with the county every document required by federal, state, and county law, all of which are publicly available….”