Those confronted with the hard realities of becoming a caregiver for a close relative or friend are usually hard-pressed to find the humor in their situation. For adult children, suddenly becoming a kind of parent to their own parent, emotional shifts can be as overwhelming as physical and logistical demands.

Erica Herd, a writer and actress, found herself in this difficult situation when her mother, also an actress, was diagnosed with Alzheimer’s disease. As it escalated, she became determined to find a creative outlet in which to express the new world in which they both found themselves.

“I needed to get this out of my system. Alzheimer’s is a very isolating kind of disease,” Herd said. Herd’s experience resulted in a theater piece, Alzheimer’s Blues, which she will present at 8 p.m. on Feb. 1, at Garrison’s Depot Theatre. A discussion will follow the performance.

This theatrical venture actually began with a series of blog posts, nearly three years ago, on Open Salon. Some were in a comedic vein while others were quite “serious and poignant — it fluctuated,” Herd says. She then determined it was something she wanted to theatricalize and make into a play of some kind. Meeting with Cheryl King, artistic director at Manhattan’s Stage Left Studio, together they brought Herd’s “stack of posts” to dramatic life, changing a lot of narrative to dialogue, writing scenes and structuring and shaping it into theatrical, presentational, form.

Herd’s husband, L.E. Swenson, also contributed several scenes. Portions of the play were workshopped at Stage Left in 2012 and the play then with the working title of The Year of Dead Cats, premiered there in June 2013.

At first, Herd didn’t realize her mother had Alzheimer’s, “so when she accused me of stealing her Social Security checks I thought she was being mean. The last straw was when my husband and I took her upstate to visit my brother. When we picked her up, her blouse was on backwards and she had no shoes — not like her at all as she was usually a snappy dresser. It was a five-hour drive, and during the trip she started to panic and I realized something completely different was happening.”

Herd’s mother, Katherine Lind, was, in the words of her daughter, “an incredibly gifted actress and singer who was struck first by mental illness, then Alzheimer’s, making it impossible for her to continue working at her chosen career.” Lind was actually born Dolores Wozadlo and took the stage name Katherine Lind after Jenny Lind, the Swedish opera singer. 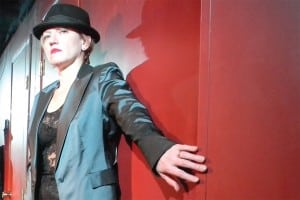 From an early age, she knew she wanted to be an actress. After studying in the Midwest and in New York City, she enjoyed a successful career in the theater in the 1950s, before the illnesses took their toll. Herd, who joined various Alzheimer’s family support groups after the diagnosis, continues as her caregiver today; she now lives in a nursing home.

Herd says her experience “inspired me to create a performance as a tool to help me and others process the ironic humor, stress and pitfalls inherent in caring for a terminally ill loved one … I also touch upon the financial aspect of Alzheimer’s – navigating state bureaucracies, i.e. Medicaid, when the person afflicted is low-income, like my mom.”

The play, which is multi-media and contains slides and video in addition to music, consists of non-linear vignettes — “a Brechtian format” describes Herd, “but there is a through line. I do hit upon cataclysmic issues: around the time of the diagnosis Hurricane Irene flooded my home, I had numerous cats which died, but there is hilarity, too — there has to be.”

Sections of the play involve fantasy; Herd plays multiple roles. As press notes state: “The play shares our experiences in navigating the comedic, strange, and unknown terrain of Alzheimer’s, mental illness and federal and state bureaucracies. We strive to find meaning, hope and sanity through humor, storytelling and music … Alzheimer’s Blues is a surreal look into the lives and minds of a mother and daughter, a story about life, death and love, but mostly love.”

Herd is honest in saying that some who have seen it have loved it; some have not. 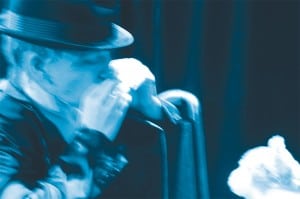 “Some people think certain subjects can have no humor in them – that you can’t make light of this kind of situation in any way,” she notes. “But I feel differently. I think it can speak to a lot of people, and not necessarily people in the same situation, but anyone taking care of anyone. It’s a lot about love and about keeping a communication with a person despite all the infirmity. This show is not for everybody, but most people like it. Some caregivers have said ‘I was there with you every moment on stage, laughing and crying at the same time.’”

Ultimately, Herd says she is “hoping that people seeing it understand that you can find humor there somewhere, and, most importantly that they not lose the person in the disease. Sometimes it’s hard to see that.” Herd’s current efforts are focused on performing Alzheimer’s Blues wherever she can, but she has thought about her next writing project already.

“It will be a multi-person play,” she says, “and it will be funny — and only funny.”

Tickets for Alzheimer’s Blues cost $20 for adults, $18 for seniors and $15 for students and can be purchased at brownpapertickets.com or by phoning the Depot at 845-424-3900.