Paperwork adds up for one-man office

When it comes to hats, Bill Bujarski wears several. A member of the Cold Spring Police Department since 1998, he has also served as the village building inspector since late 2009. Until the end of 2013 he was building inspector for the Town of Putnam Valley as well. And recently, he became chief financial officer for the Response Protection Corporation, a firm that specializes in providing safety and fire suppression products, mainly to fire departments across the U.S. 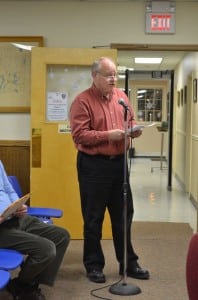 Another aspect of Bujarski’s varied background serves him well in his duties as village building inspector. He studied architecture at the New York Institute of Technology and has been a licensed architect for more than 30 years.

But none of that prepared him for the perils of running a one-man department. While he works only 16 hours a week as building inspector, there is no staff to assist with clerical duties – an aspect of the job that he says continues to use more and more of his time. “The biggest problem is keeping up with the volume of paperwork,” he said.

While the national economic outlook has been bleak, it has not provided Bujarski with much of a breather locally. “The village is changing. We’re doing pretty well — and we weathered the economy better than most of Putnam County,” he said. And “doing pretty well” means more paperwork.

Ongoing discussions with the Town of Philipstown may provide relief. Village officials have been exploring an increase in the level of cooperation between the two building departments. “Not a physical consolidation … but more sharing of resources,” Bujarski said. “The town also has limited capabilities — they’re maxed out as well.” Despite that, Bujarski said the town lends a hand when it can. “They’ve helped us out in emergency situations.”

A number of ongoing projects that the building department must deal with are high profile in nature. The future of the Cold Spring post office is definitely high profile — but it is one project that does not involve Bujarski. A trailer was recently moved onto the site adjacent to the current postal facility and will serve as a temporary post office, a move necessitated by the upcoming expansion of Foodtown.

Normally that would require Bujarski to inspect the facility to ensure it complies with the Village Code — but no such inspection was required because it is part of a federal facility. “They can do pretty much whatever they want,” Bujarski said.

While he doesn’t have to concern himself with the post office, the much-anticipated expansion of Foodtown rests on Bujarski’s plate. The U.S. Postal Service’s lease with Foodtown Plaza, and its owner George Serroukas, requires that the post office vacate by the end of January.

Bujarski said that he has already reviewed one set of plans for the expanded supermarket and sent them back with comments on “basic zoning code issues” that needed to be addressed. “I expect to receive revised plans very shortly,” he said, adding that the proponent wants to begin work on the expansion as soon as possible after the post office has moved into the temporary trailer. 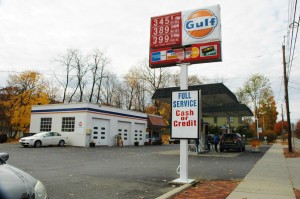 The old Elmesco garage is a new Gulf station and apparent Dunkin’ Donuts outlet in the making. (file photo by L.S. Armstrong)

Bujarski reviewed the application, making only minor revisions to bring it in conformance with the Village Code. The revised application, “ … is sitting on my desk now and I expect to issue a building permit within a week.” Plans are essentially unchanged from what Elmes proposed and Bujarski said the new owner hopes to begin construction as soon as possible.

Impellittiere Motors, the former car dealership located on Fair Street, has been an eyesore for years and has raised safety and environmental concerns, some of which remain unresolved. “We worked with DEC (New York State Department of Environmental Protection) and cleaned up the old fuel tanks there,” Bujarski said, but added that the abandoned building and property surrounding it is still in need of work. “The site needs to be made more secure … and the mess that’s still there needs to be cleaned up.” He said the number of vehicles kept on the site also remains an issue.

Last week, Bujarski reported to the Village Board that recent changes in how inspections of new electrical and propane gas hookups in Cold Spring are handled underscore the need for help within his department. In the past, Putnam County conducted both types of inspections — for a fee. However the inspector who did the work fell ill last year and has not been replaced.

In the interim, Bujarski has been conducting the gas inspections within the village and he thinks his department will ultimately take over the operation. At present fees continue to go to the county because there is no one in the building department to handle the clerical duties involved. Bujarski said he has also been led to believe that the county will soon stop doing electrical inspections. If the village inherits that responsibility he said work will be outsourced to companies that provide that service – but that he will be required to sign off on inspections.

“The biggest challenge is the volume of work and the paperwork — and working only 16 hours a week, with no one to help out,” Bujarski said.