Enduring influence on music and river

Pete Seeger, Beacon’s favorite son, a champion of the Hudson River’s rescue from destructive pollution, died this week of natural causes. He was 94 years old. 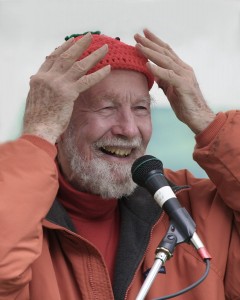 Seeger was known worldwide for his folk singing, music writing and political activism. Locally he was seen as a neighbor and friend to many; someone who might on any day be encountered standing alone in a supermarket, drug store or the train station offering a smile or a friendly word.

He was known as someone always willing to pitch in for a worthwhile cause. He appeared at many a Beacon Main Street storefront or classroom or church to show solidarity with others seeking justice or reform or to just play music.

Seeger was an iconic national figure who eschewed the trappings and poses of American celebrity. He was often quoted as saying he liked things simple. When not playing music on the road he preferred the familial hearth and swinging an axe for firewood. But he wasn’t shy about using his influence or presence to further a cause he believed in.

As with anyone whose life spanned nine decades Seeger witnessed many changes in American life. The difference with him was his willingness to effect the changes. 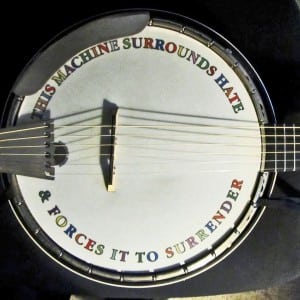 A replica of Pete Seeger’s banjo (Photo by Rick Gedney)

He saw the ravages of the Depression and sided and sang with union organizers, served his country in the military during the Second World War, reached stardom at the top of the pop music charts as a member of the Weavers, found himself blacklisted from television and accused of contempt of Congress for refusing to answer questions about his association with communist organizations, developed a successful solo touring, songwriting and recording career, participated in the civil rights movement and stood with the anti-Vietnam War and subsequent war protestors. Already in his 90s, he visited with the Occupy Wall Street protestors in New York City.

For all his association with leftist politics and the condemnation sometimes associated with it nationally and locally, Seeger eventually accepted accolades and honors from presidents and national cultural organizations as his views became more mainstream and his musical contributions were more deeply appreciated by subsequent generations. He has left an indelible footprint in the worlds of music and activist politics. He viewed the two involvements as inextricably linked and made no compromises in one for the other. 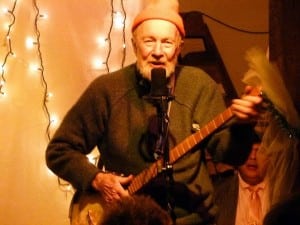 A Beacon resident for over a half century, Seeger’s most enduring contributions locally will be first his advocacy for cleaning the Hudson River and helping people see it as a living organism rather than a repository for industrial waste and residential sewerage. While protecting the river’s ecology is now a consensus public perspective, it was hardly the case when Seeger first promoted the cause with his sailing boat, the sloop Clearwater.

Secondly, Seeger also had an abiding influence on many local musicians whatever their personal styles of playing. He spent many hours listening, critiquing, collaborating and playing music with a wide variety of people.

Our other stories posted at Philipstown.info explore these contributions with those who worked and played with Seeger.