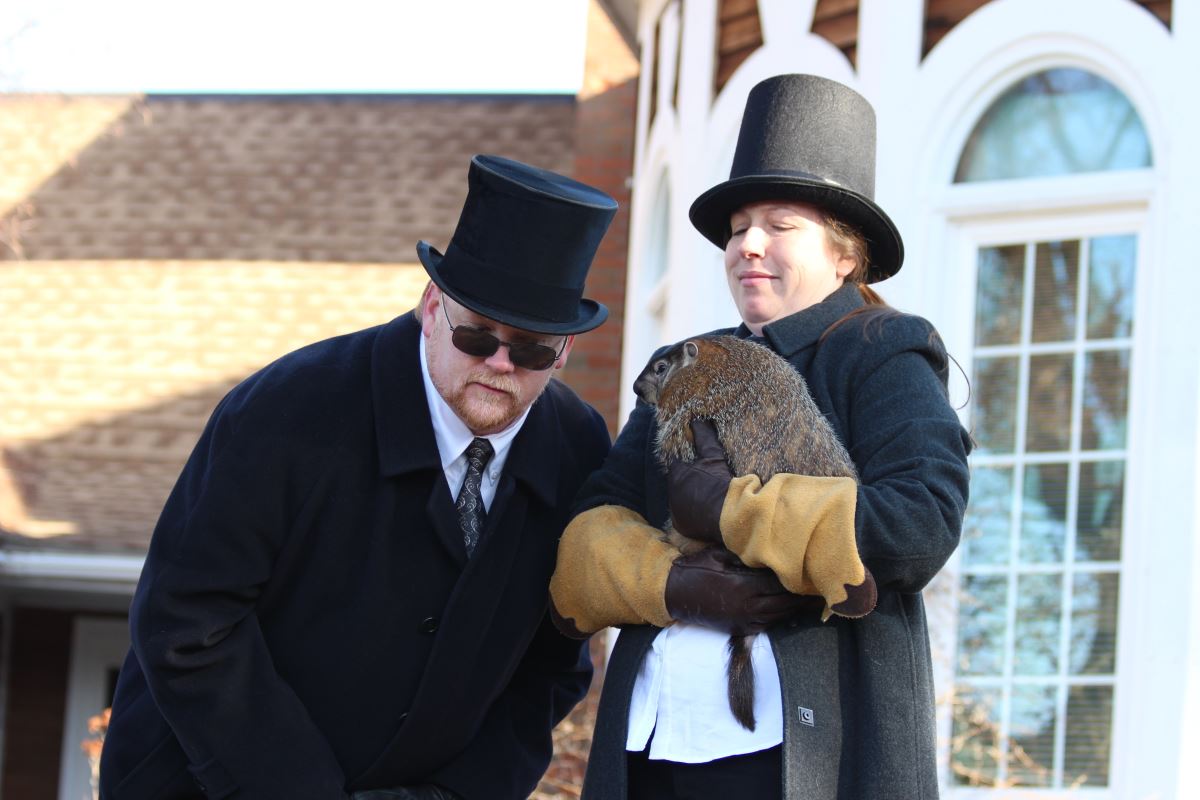 Prognosticating at the 2013 Groundhog Day Celebration at the Wildlife Education Center. (Photo by Maureen Moore)

‘Big day’ on the horizon for Marmota monax

In that ritual of early February, Groundhog Day is nearly upon us. Once again, on Feb. 2, a Marmota monax becomes the focus of more attention in a few hours than his breed receives in any other capacity. Then it’s back to relative obscurity for 364 days, his name invoked only when referring to repetitive activities the film named after him conveys, or — in exasperation — by dismayed gardeners upon discovering what’s been munched by these hungry marmots.

Most people don’t know much about them — they’re not even 100 percent certain about the age-old furrowed brow question: “Is a groundhog the same thing as a woodchuck?” (Yes — one of 14 species of marmot.) The word woodchuck is thought to be a misinterpretation of their Native American name, wuchak, roughly translated as “the digger.”

Hudson Highlands Nature Museum (HHNM) is hosting a Groundhog Day Celebration on Sunday, Feb. 2, at their Wildlife Education Center (WEC) in Cornwall-on-Hudson. Usual goings-on will ensue as the master of ceremonies consults with a groundhog, Hudson Highlands Harry to be precise, for a prognostication about the remaining weeks of winter.

The tradition of Groundhog Day began in Europe in the 1800s when hedgehogs and badgers were used for a similar purpose. When European settlers arrived here it was continued with groundhogs and served as an important indicator of the weather, more critical then in terms of putting away enough fodder to feed farm animals and making sure root cellars were well stocked if a lengthy winter was predicted.

Importance may have diminished, but the fun hasn’t and at this year’s WEC festivities there’ll be crafts, games and a guided walk to search for shadows. Pam Golben, WEC’s director of education, has assisted this reporter in providing a picture of these creatures, the largest members of the squirrel family, thriving and abundant in this area.

With a widespread range across much of North America, groundhogs are found in a variety of habitats and ecosystems. They prefer lowland areas, often where woodlands meet open spaces:  meadows, pastures, low elevation forests and farmland. Unlike the cause and effect human/animal interaction with other species, human encroachment into more and more forested land has increased food access for groundhogs causing their numbers to flourish. Never far from cover, they are partial to loam and sandy loam soils for burrowing.

Using their strong, clawed forelimbs and large teeth, they construct burrowing dens, some with as many as five entrances. These dens can be up to 45 feet long, extending as far underground as 5 feet. There are separate areas for sleeping, lounging and eliminating. Groundhogs are territorial, and will defend their burrows against intruders.

Groundhogs hibernate all winter long, relying solely on body fat for survival. Hibernation, deep within the burrow, reduces their metabolic processes and causes a pronounced body temperature drop — from about 96 degrees Fahrenheit to about 38 — and a slowing of the heartbeat from 100 beats per minute to four. While hibernating, the groundhog rolls itself into a ball and tucks its head between its hind legs. It does not eat, nor eliminate and its teeth and hair do not grow.

Hibernation generally begins in October and ends in March or April, with males emerging first to establish territories and search for mates. Older, more dominant males hold territories whereas younger males are nomadic. With the exception of mating season, groundhogs are non-social. Somehow they seem to know when to wake, but actual emergence depends on daily temperature.

Physically, groundhogs usually weigh no more than 14 pounds, and are about 25 inches long, including the tail; males larger than females. Their fur is cinnamon-brown to greyish-black. They have short, powerful legs and a bushy tail; their curved nails help with digging. With broad flat heads, small black eyes, and rounded ears, they often stand on hind legs, projecting a taller appearance. Their body is covered with white-tipped guard hairs giving them a grizzled appearance.

Groundhogs breed late in winter and generally females give birth to four or five young in early spring. Males have multiple mates each season. As birth approaches, the male leaves the den. Newborns stay with the mother for the first few months, and then start to find their own territory. Pups use the den for protection while the mother is away.

Generally, groundhogs live four to six years in the wild but, due to predation and disease, often do not live past age three. They may live up to 10 years in captivity.

Solitary, diurnal animals, groundhogs are usually seen on the ground, but can climb trees and are capable swimmers. Although usually asocial, they sometimes greet each other nose to nose. Groundhogs respond to threats arching their bodies, baring teeth, and raising their tail. They also communicate via scent glands and vocalizations.

Teeth grinding and chattering are common when they are cornered. They use sight to detect predators, which include gray wolves, coyotes, domestic dogs, red foxes, black bears, lynx, bobcats, hawks and snakes. They will make noise with their incisors and use short, sharp whistles to warn other groundhogs of danger.

Preferred forage includes alfalfa, clover, and dandelion and other grasses, ferns, leaves of bushes and fruit. Other foods include bark, leaves, insects, and bird eggs. All groundhogs store fat for winter hibernation. An adult groundhog can consume over a pound of vegetation each day, often destroying agricultural crops and pastures.

The HHNM Groundhog Day Celebration takes place from 10 to 11:30 a.m. and costs $8 for adults, $6 for children, with discounted rates for museum members. Advance, pre-paid registration is required. WEC is located at 25 Boulevard, Cornwall-on-Hudson. Visit hhnaturemuseum.org or call 845-534-5506, ext. 204.