Four area school teams will showcase canned food sculptures and compete in a public judging of their works to benefit the hungry in the Hudson Valley. The event will be held at the Poughkeepsie Galleria, Route 9, Poughkeepsie, from Feb. 1-7, under the auspices of Canstruction, an international competition that raises awareness about world hunger while facilitating the donation of thousands of pounds of canned food to local food pantries. 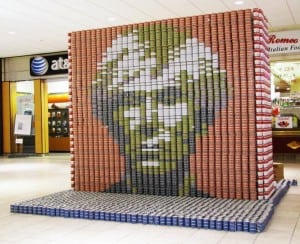 An example of Canstruction.

The competition will feature the architectural designs of students in kindergarten through grade 12 from The Kildonan School, Oakwood Friends School, The Randolph School and Poughkeepsie Day School, which was selected by Canstruction as the official organizer and promoter of the competition. The entry receiving the largest number of cans, as donated by visitors to the Galleria that week, will be declared the “People’s Choice” winner. All cans used in food sculptures and donated through this competition will go to the Food Bank of the Hudson Valley.

Says Poughkeepsie Day School’s community liaison, Christina Powers, “Poughkeepsie Day School is honored to be spearheading this community effort for the second year. We urge everyone to come down to the Galleria  … with their canned goods and vote! Last year, Canstruction JR Hudson Valley collected 5,975 pounds of canned food. With everyone’s help, we can top this number.” Read more about the event at canstructionhv.com.