Pete Seeger made fewer public appearances the last few years. His absence was noticed last week at the Martin Luther King Jr. musical parade, a first-time event for Beacon that he envisioned. When his wife Toshi died six months ago, people mused and feared that he would soon join his life-long partner. A troubadour of peace for multiple generations and a local hero, Seeger has left the planet he cared for so passionately. With his legacy, he leaves a city in mourning and a lot of work still to be done.

Responding to news of Seeger’s death are the water conservation organizations he helped to realize, young environmentalists inspired by his leadership, and Beacon residents who will miss a chance encounter with him on a street corner, at the post office, or one of the city’s outdoor festivals.

“Pete will go on inspiring those who endeavor to heal us humans and our one lonely planet, long after we say our final goodbyes to the man himself,” said Paul Gallay, President of Riverkeeper, in a prepared statement. “We promise to carry on his work and make the most of the gifts he left us.”

Manna Jo Greene, Environmental Director for Hudson River Sloop Clearwater, saw her first Pete Seeger concert about 50 years ago. She was invited to join Clearwater, founded by Seeger, in 1999. She calls him her mentor. 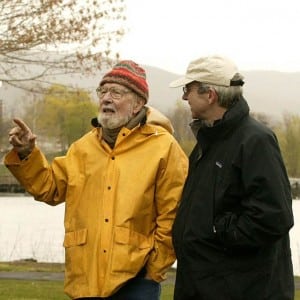 “It was never about Pete. It was always about making this a better world, inspiring people to work together through the power of song,” Greene said in an interview. “He had a vision that the Hudson River could be cleaned and restored to its natural state. It was unheard of at the time, when it was like a sewer from all of the industrial discharge. He reconnected people to the river with a boat (Sloop Clearwater), and took his message right into the halls of Congress.”

“It is a great honor to have a part in carrying out his legacy and to be sure it becomes manifest,” said Greene.

Pete Seeger is a heroic figure. He stood up for the Hudson River and the communities along its shores at a time when most people were indifferent about these special places. He personified the ideal that Scenic Hudson’s founders fought for at Storm King Mountain — the belief that every person can take a principled stand, fight for a healthy environment and make a difference to save our planet. He was a potent inspiration to me, my wife Tara, and our daughters. He reached into the hearts of people of all ages and circumstances, including countless children who sailed on the Clearwater along his beloved Hudson. We will miss him, but the power of the lessons he gave us will endure.

Pete Seeger gave the Sloop Woody Guthrie to Beacon more than 20 years ago as a local version of the Clearwater and the Sojourner Truth, “floating classrooms” to raise awareness for water conservation on the Hudson River. The Beacon Sloop Club was founded by Seeger to maintain the boat and also organizes the annual Strawberry, Corn and Pumpkin festivals in Riverfront Park and other educational and recreational events.

Saul Rozinky, President of the Sloop Club, said that well into his 80s Seeger was present at every executive meeting. “When he was hale and hearty, he would come with his agenda items, and then he would stay for the circle of song that followed.”

The Sojourner Truth, which belonged to Ferry Sloops, became unmoored from its docking in Hastings during a fair weather gale in September 2001 and was destroyed. The Woody Guthrie is in need of major repairs, for which the Beacon Sloop Club is in the middle of its largest fundraising campaign ever.

“Pete was an example of authenticity, he truly practiced what he preached,” said Ava Bynum, executive director of Hudson Valley Seed and manager of Cold Spring Farmers’ Market. She first met Seeger while working at Clearwater. “He taught me not just that everyone can make a difference but that everyone does make a difference, whether they are meaning to or not. That everything you say, believe and do is a chance to change the world for the better.” 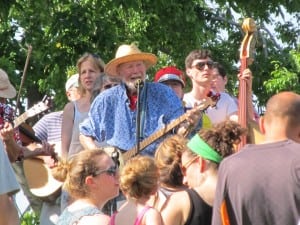 “No event was too small for him. If people were engaged, activated, and motivated to protect our communities and environment, then he was there to show his support,” said Dana S. Gulley, community outreach and volunteer coordinator for Riverkeeper. In response to the outpouring of personal stories about Seeger on social media newsfeeds, Gulley added, “It is amazing how the death of someone who changed this world can affect so many of us so intimately.”

Sam Anderson, a journalist and a Beacon resident since 2005, wrote an article about Pete Seeger in the magazine, New York, for his 90th birthday celebration at Madison Square Garden:

Every June he serves strawberry shortcake at a festival at our riverfront park, which natives tell me was some kind of flaming toxic waste dump before the Clearwater came around. He’s visited my daughter’s preschool class. I’ve even overcome my crowd-singing aversion, temporarily, to sing Christmas carols with him on Main Street. That’s the power of Pete Seeger: No matter what he’s doing, no matter what your level of resistance, he always finds a way to make you join in.

Connie Hogarth was a friend of Pete Seeger’s for 45 years and his neighbor for 16 years. “He was a man of elegant humility with a simple idea: use the power of music and song to inspire change. His untiring commitment to the environment, to peace and to social justice has had an enormous influence on everyone who met him,” she said.

Referring to the countless children who met Seeger and to the Rivertown Kids music group he started, Hogarth said, “Even when he wasn’t feeling at his best, when he was in a room with kids, he would come to life with a burst of energy that was infectious. The younger generation was at the heart of his existence. They will carry Pete’s vision for ‘seven generations ahead,’ a Native American ecological concept.”

“Even though I didn’t get to spend much time with Pete, he has been my power animal for my work in Beacon,” said Sarah Womer, director of Zero to Go, a recycling and reuse consulting firm based in Beacon. “I never acknowledged it until now, but he’s an unspoken part of the reason why I’ve worked so hard.”

“Of course there’s more to be done but, once people know how, they take it home and keep doing it,” continued Womer. “I think the defining concept is contagion. Pete wanted everyone to participate — every voice in song, every hand clapping. It’s a beautiful thing. We have to keep his song going and encourage more people to sing along with us.”

2 thoughts on “City of Beacon Mourns Loss of Seeger”