For nearly 15 years now, on the first Friday of every month, poetry rises up to the soaring rafters of Beacon’s Howland Cultural Center (HCC) in the form of Calling All Poets Series (CAPS).

The evening begins with readings from established poets and concludes in an open mic in which anyone attending may participate. With an average of 35 people on hand, 15 to 20 of whom participate in the open mic, the atmosphere is convivial and has a goal, as it always has, of making people feel comfortable, regardless of their prior experience as either writer or interpreter. Now the series is extending its digital reach, streaming in out-of-town poets and expanding its online and print presence. Its organizers believe it is the second-longest running poetry reading series in the Hudson Valley, exceeded only by Warwick’s Poetry On The Loose.

Jim Eve and Mike Jurkovic of Calling All Poets (Photo by A. Rooney)

CAPS began in 1999, when Jim Eve, who formerly by day (and sometimes night) worked for IBM, but whose passion was poetry, initiated it. After moving to Beacon he ventured into HCC, curious as to what it was. He instantly “fell in love with it, started going to events there, made friends” and soon was asked to join their board. Eve had been writing poetry since the age of 12, though he “never thought of it as poetry — at that age it was just a bunch of words I put down. It was one way of not getting in trouble; writing for me was a therapeutic thing — that was it,” he recalls.

His notion of the kind of evening he wanted was based on his own past experiences. “I wanted to make it a place where there wouldn’t be any worry about being turned away. The premise was to open our doors to any and all levels of writing.” Another poet, Bill Seaton, encouraged Eve — who was also involved with the Second Sunday Poetry Group and the Hudson Valley Writers’ Association, both at that time located in Poughkeepsie, and who formed the Mt. Beacon Poetry Society at Howland Library — to start CAPS. 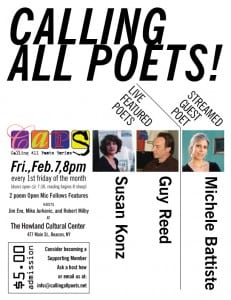 Jurkovic joined forces with Eve in 1995 after founding the Voices of the Valley Poetry Performance Series, which was located in New Paltz and Kingston. Jurkovic had retired from a working life in music as a roadie, songwriter, musician and manager. “I got lazy. It’s a lot easier to carry around a notebook than to set up a synthesizer,” he jokes. His poetry has been published in numerous publications, and he served as president of the Hudson Valley Writers’ Association. “We both were doing readings, and traveling to New York City, where it seemed like you’d get a whole lineup full of angry young this or angry young that. Up here it is so much varied,” he says.

Together they honed what is still the format today. Doors open at 7:30 and the evening, hosted by Eve, Jurkovic or Robert Milby, begins at 8 p.m. sharp, with the first of two feature readers, each of whom reads for 30 minutes. In the early days the feature readers were not always “credentialed” i.e., published in some way, but now they almost always are. These poets read in a variety of styles, from the dramatic, to stand-up, to straight recitation.

Some, like Philipstown’s Irene O’Garden, live locally, while others travel from New York City, Pennsylvania, Connecticut, and points in between, up, down and all around the Hudson. Some poets find CAPS, while others are recruited in a casual way, through flyers, calendar listings and by publicizing the series at other poetry readings; poets recommend fellow poets. Jurkovic says it is a point of pride to him that the featured poets have always received a payment for their work, small but an important gesture.

Looking out from the podium at Calling All Poets. (Photo by Christopher Wheeling)

Work read at CAPS has found its way into other arenas. Several of the characters O’Garden used in her off-Broadway play Woman On Fire, were developed at her readings there. Poet Eddie Bell read a series of poems about lynchings at CAPS, where they were recorded; he later used the recording as a CD accompanying his book Eeny Meeny Miney Mo, Time to Lynch a Negro.

After the two feature readings, the open mic allows anyone up to five minutes to share their writing. It’s gratifying for Eve and Jurkovic to watch the transition in returning readers. “We’ve seen people come in shy, and now they’re seasoned and writing prolifically,” says Eve. “That’s what I love about the diversity in readers; it’s encouraging.” Many are teachers in the area, including a contingent from SUNY New Paltz.”

Lately their audience has been expanding, and both men believe it is because of their development online. They now try to record every feature and put that recording up on the site. At their next session, CAPS is introducing something new: the live streaming of an out-of-town poet, in this instance Michele Battiste, who lives in Colorado.

It is hoped that reciprocity will occur, with local poets beamed out in return. More locally “we have a big base in Albany,” says Eve, “and we’re trying to bring them in to us via technology.” By summertime they hope to include a feature on their webpage where one can register for “cyber open mic” and perform and/or watch the entire proceedings.

Not everything is cyber, however. Each year they do an all-day poetry marathon — the 2014 edition will take place on Aug. 2, from noon until 11 p.m. They are looking to do a magazine, attached to CAPS, but not all CAPS, distributed nationally. They also hope to do their second anthology (the first came out 10 years ago) relying on a group of editors who are part of their base of poets.

“I don’t just want a poetry reading,” says Eve.  “We’re moving out, we’re a blooming onion right now. There will be a lot of different avenues these things are taking us down: anthologies, podcasts. Hopefully people will say ‘hey — we want to be part of this’ … although we’re breaking out this year, we’ve had a pretty good run and from here on it’s going to get even better.”

The next CAPS takes place on Friday, Feb. 7, at the HCC, located at 477 Main St., Beacon. The featured poets are Susan Konz and Guy Reed. Admission is $5 and includes refreshments. Visit callingallpoets.net, which, Jurkovic and Eve admit, is not always up-to-date, but does include further contact information.

2 thoughts on “Calling All Poets at Howland Cultural Center”