An overflow crowd of older residents — many arriving without prior notice — filled the Putnam County Golf Course clubhouse Wednesday for a donuts-and-coffee breakfast, speeches, and lunch as county officials proclaimed 2014 the Year of the Senior and announced a new Putnam County TV campaign. 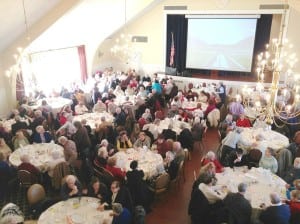 Older-age residents crowded the dining room for the Year of the Senior lunch. (Photo by L.S. Armstrong)

In written remarks printed in the program, County Executive MaryEllen Odell also promised seniors the county would “move forward to keep you mobile by means of our revamped public transportation system, to improve your Carmel Friendship Center [senior-citizen center] and to build one in Cold Spring.” She did not elaborate.

An adequate senior center, comparable to those in other Putnam towns, has long been a Philipstown goal and is seen as a potential occupant of a redeveloped Butterfield Hospital property or an improved American Legion building.

The free “gala” (contributions of $3 were welcomed) drew at least 330 mostly-aged participants, far more than anticipated, forcing organizers to set up extra tables in the foyer. The turnout included at least 15 Philipstown residents, according to local senior activist Donna Anderson, who was subsequently saluted as one of Odell’s liaisons on senior concerns.

“People showed up who didn’t reserve” a place, but “we’re not going to turn them away,” Odell observed, as she greeted seniors relegated to the dining hall’s upstairs balcony, alongside the press, before the official activities began. “This is the first of many, many events” this year. “So far, so good,” she said.

Subsequently welcoming everyone from the podium, Odell briefly lauded senior citizens for their contributions and noted the upcoming 100th birthday of her grandmother, whom she credited with inspiring the Year of the Senior (highlighting programs and challenges for Putnam’s elderly).

Pat Sheehy, director of the county Office for the Aging, provided two nuggets of relevant data.  “This year Putnam County becomes the fastest-growing senior population in New York State,” she said. “Also this year, one in every four residents in Putnam County is going to be 60-plus. So there’s a lot of us out there.” Sheehy urged the diners to lobby Congress to renew the nearly 50-year-old Older Americans Act to support senior citizen programs.

Libby Pataki, a Garrison resident who directs the Tourism Office, introduced the county’s new TV spot, scheduled to air in New York City, Albany and Connecticut markets this spring. She also pointed to photos submitted in the county’s first photo contest, many showing Putnam’s outdoor attributes. “All these beautiful, beautiful places have a very important role to play in the local economy,” Pataki said. Parks and historic and scenic sites drive the Hudson Valley’s $4.3 billion tourism economy, which employs 80,000 people, she said. “In Putnam County alone, tourism generates over $54 million in spending annually and that sustains well over 100,200 jobs,” she added.

In comments to Philipstown.info as lunch got underway, Pataki outlined other Tourism Office initiatives this year. These include:

Moreover, the Tourism Office has just created a Putnam County Television and Film Commission, to link historic and scenic sites and villages (including Cold Spring) with TV and film industry crews seeking locations for productions. Overall, under Tourism Office auspices “we’ve got a lot of initiatives going on,” she said. “This year, we’ll have some sort of program every month.”

District 1 Legislator Barbara Scuccimarra, who represents Philipstown, endorsed both the Year of the Senior and the TV spot. “Since Cold Spring is the gateway to tourism” in the county, visitors will come to Philipstown first, and “I hope our shops will benefit,” she said.

State Sen. Greg Ball, a Republican whose district includes part of Putnam County (but not Philipstown) also showed up, circulating table-to-table to greet attendees and — one later said — giving away cookies. He was not on the agenda and is rumored to be considering a run for county executive this fall. If Odell, also a Republican, seeks re-election, Ball’s insurgent candidacy could divide their party.