Starting next week, I am taking a sabbatical from this column. In the meantime, Joe Dizney will be filling this space with his wonderful cooking tales and recipes.

It was one of those things you didn’t realize you wanted until you tasted it. After that, you were prone to chronic, recurrent cravings for the warm gingerbread served at the Paris Commune, a small restaurant that used to inhabit a tiny storefront in the West Village.

Even at brunch — when my friends and I would line up on the sidewalk for half an hour to get a table, our woozy, hungover brains clinging to the idea of restorative omelets or obliterating French toast — the gingerbread proved irresistible. As soon as we sat down, I’d request an order, and it would arrive dusted with confectioners’ sugar and accompanied by a slouching pile of whipped cream. 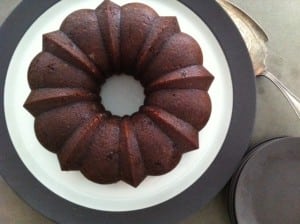 I frequented the Paris Commune for many years before I purchased an apartment two stories above it, thereby becoming, with my neighbors, its landlord. It was wonderful having the Paris Commune as a tenant, despite occasional issues with vent fans or fish delivery. The proprietors were natural hosts — they loved people, loved creating a convivial environment — and I felt safe living above them, as if, when I tucked into bed at night, my extended family were downstairs having a lively, never-ending party.

I thought I would stay there forever. But things change. I acquired an actual family; we moved. So did the Paris Commune, which relocated a few blocks west and then, in 2011, closed for good.

The other day, I saw a photograph of gingerbread and was hit by a surge of nostalgic longing. The picture was in an English cookbook — not surprising, because the English have loved ginger since the Middle Ages, when they began using the spicy, pungent rhizome in dishes both savory and sweet. Indeed, I’ve sometimes wondered if I owe my ginger obsession to my half-Scottish father. 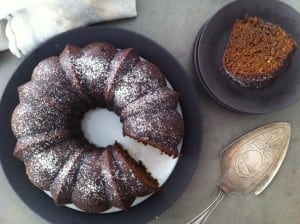 I set out to find a recipe as good as the one I remembered. The Paris Commune’s was never published, however, and the phone number I had for the former proprietor is no longer in service. Trawling online, I discovered an appealing recipe by Claudia Fleming, who was the founding pastry chef at the Gramercy Tavern and one of my early culinary heroes. Her version contains Guinness Stout — something the Paris Commune version surely lacked, but which sounded so intriguing I had to try it.

It was excellent — caramelized on the outside, and simultaneously moist, rich, bouncy, and airy within. Moreover, like all great gingerbreads, it had hints of darkness, thanks to the bittersweet, almost medicinal flavor of molasses. It seemed to me the perfect dessert for this season, its abundant spices conveying warmth long after it emerged from the oven.

Right away, my family came down with versions of my early addiction, devouring the whole cake in two days, something that rarely happens in this house (we are not big dessert eaters). But to me it was too dessert-like: Too sweet and lacking in … something. But what? Fruit cakes and plum puddings sprang to mind — my mother used to make the latter at Christmastime using Jiffy Gingerbread Mix and canned plums, in a half-hearted but surprisingly tasty nod to my father’s heritage.

I wondered about adding fruit to mine: pulverized raisins or grated pear perhaps? I also decided to decrease the sugar and replace half the flour with whole wheat — I wanted something that could be eaten at breakfast or snack time, as well as after supper. I was just about to bake up a couple test batches when Hugo, a former Paris Commune owner, replied to me on Facebook. After catching up (we hadn’t spoken since 2006) he told me the secret: his gingerbread contained grated carrots.

Carrots, ginger, and beer! An insane combination, and just right for this insane winter. I adjusted my recipe, and baked my way straight into a sweet chapter of my past — which is gone of course, but, given the right ingredients, not altogether irretrievable.

This is particularly good with not-too-sweet whipped cream alongside.

One thought on “Mouths to Feed: A Gingerbread Woman”