Those who, like this reporter, have not for some time been inside Ella’s Bellas, formerly a take-out bakery known for its gluten-free line, will be surprised entering their new, more than twice-as-large space. The expansion into the premises next door took place last April, and now Ella’s Bellas has fully transitioned into a large, welcoming café space offering a full range of breakfast and lunch options, none of which use wheat, where the emphasis is on using as many local products as possible to achieve great tasting food, with a focus on flavor. 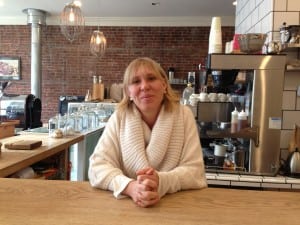 Ella’s Bellas began its life back in 2009 as a wholesale bakery which owner Carley Franklin Hughes operated out of her own home. Then a stay-at-home mom with a young daughter who eventually became the inspiration for the bakery’s name, she began making both “regular” and gluten-free goodies.

Feeling a need to get out of her home as she was “driving my family crazy” Franklin Hughes decided to focus on gluten-free baking after thinking about a scenario where “a little girl went to get brownies after a dance class and wasn’t able to.”

Knowing many people with allergies and others who were going through cancer treatment, she decided, after researching and finding no equivalent in the Hudson Valley, to pursue opening a takeout, “grab and go” retail shop, stocked with gluten-free goods, while using the back of the storefront to maintain her wholesale business, because she didn’t feel that there was enough of a guarantee of street traffic walk-in business in Beacon. That first incarnation opened in November 2011.

Although Franklin Hughes, who grew up in West Virginia and has lived in Beacon for eight years, had no food retailing background, she had “food experience” starting with work at her college dining hall. “I was that kid,” she recalls, “who was always throwing dinner parties at college.”

Attending her sister’s graduation from Bard College, she experienced new food flavors, like pesto pizza, for the first time. “We couldn’t get things like that in West Virginia,” she says. Winding up working in theater, she still could never leave food behind. At her last job, as a company manager for a small theater company in New York City, she was “always planning food-centered opening nights. Finally I decided to turn it into a career.” 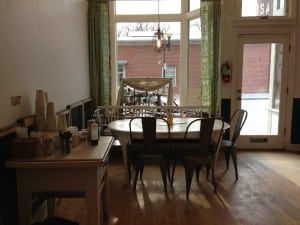 A table by the window

What happened with her new storefront surprised Franklin Hughes. First of all things were continually busy, leaving her little time for the wholesale component of her business, which she eventually eliminated. “Soups and salads just took off. And we saw that people were staring at the door but leaving because there was no place to sit down. So, when tenants next door left, and with the closing of the Coffee Shoppe café across the street, Franklin Hughes decided to expand. Renovations have produced an airy, open, inviting space. Some of the non-retail area is now occupied by Tas Kafé coffee roasters, whose proprietor Greg Flaherty once had his own space further east on Main Street.

“He roasts his own here,” says Franklin Hughes. “He still has his wholesale accounts and we’re his main retail one. We’re symbiotic but our own entities.” Extolling his coffee, she notes: “I did the [Beacon] farmers’ market and so did he and he’s the reason I wound up drinking a cup of coffee after five years of not doing so!”

Offering such breakfast food options as muffins, vegan muffins, savory scones, vegan chia walnut oat bars, cinnamon rolls and quiche, Ella’s Bella’s always has sweets on hand as well. The chocolate chip cookie has always been the best seller, but there are about 10 to 15 different kinds of cookies available, cupcakes, brownies (for that prototypical girl after her dance class…), special order cakes (with a week’s notice) along with lunch specialties: always two kinds of soups and salads, sandwiches (always one vegan option — a popular recent one was white bean puree with a kale or arugula pesto, caramelized onions and black radish) — a savory bread pudding and quiche.

It’s all labor intensive, says Franklin Hughes, because they focus on each recipe rather than going for the fastest and cheapest. “Every item has a different flour blend,” she says. “We mix our own flours and have 15 to 20 different flours on site (flour can be purchased.) It’s time consuming; even to get a cookie dough to what it is takes about five more steps than at a regular bakery. Ella’s Bellas now has a staff of one full-time baker, one almost full-time baker, a part-time cake decorator, 4 counter staff, two dishwashers and, of course, its owner.

The interior renovation was largely completed by Franklin Hughes’ husband, Jason. He built the lights and repurposed old doors and windows from their old house to be used as tables. There is also an outside patio just waiting for spring, with lots of seating. This patio will be available for party rentals in warmer weather. There are garden beds in back, in which they have planted vegetables to be incorporated into the menu; a further plot of land elsewhere in Beacon provides even more home growing opportunities. (Franklin Hughes’ father was an organic farmer.)

“Every time we feel comfortable, we take another leap,” says Franklin Hughes.

Ella’s Bellas is located at 418 Main St., (toward the eastern end of Beacon, across from the Beacon Theatre) and winter hours are Wednesday through Saturday 8 a.m. to 6 p.m.; Sunday 9 a.m. to 5 p.m. and Monday 8 a.m. to 5 p.m.; closed Tuesdays. Spring/summer hours are more extended. Many Ella’s Bellas products are also stocked by the Cold Spring Coffee Pantry on Route 9 in Cold Spring, next to Vera’s. Visit Ella’s Bellas Facebook page or call 845-765-8502.