Jack Goldstein applies past principles to perpetuate workmanship and design

With five separate selling spaces at three different locations, Cold Spring antiques dealer Jack Goldstein has established a real foothold in town. He attracts a following of locals as well as out-of-towners drawn to his discerning eye. 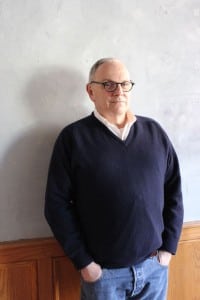 Although Goldstein had prior experience running an antiques shop in Rehoboth Beach, Del., antiques was largely a sideline for him until his move here — up from New York City — about seven years ago. Drawn, as many before him, to this area’s natural beauty and historic character, Goldstein spent decades in the city, where his deep appreciation for the very different architectural aesthetics and urbanscapes led him to active roles in preservation and land-use there. Many of the problem-solving skills he utilized could, he feels, be applied to the crux of Cold Spring’s growth issues.

Goldstein doesn’t specialize in a particular period or design, but instead looks for “quality in workmanship and design,” he says, further describing the collection as “eclectic and identifiable. From my perspective, whether it’s a keychain, a bronze or a piece of porcelain, I try to find the best example that I can so whoever buys can be sure to be getting the best they can.”

Goldstein relies on a wide network of dealers with whom he has relationships, flea markets, house sales, and consignment shops in upmarket areas to find his wares. He says he doesn’t find it “particularly difficult to find worthy things … there’s a selection process that goes on, an expertise needed if you wish to be respected. And I’m not moving a mass inventory; I look very specifically for particular items.”

What people might find surprising is that the local market is actually Goldstein’s most important base, because, he says, “I think local people have the opportunity to really look at something. Most things I sell require a certain amount of time to look at them. I do worst on the heavy tourist weekend days. Most of my sales are during the week and local support is very important.”

Goldstein discovered Cold Spring when visiting with friends who suggested a day trip to Rhinebeck. A stop in Cold Spring convinced him that it was time to “get out of the crush of the city.” He began his antiques business primarily as a weekend endeavor, using inventory he retained from his Delaware days. Eventually he cut down the time he was still spending in Manhattan, and expanded his selling spaces in Cold Spring, all under the banner of JLG Arts and Antiques.

Goldstein has found his fellow antiques dealers here to be completely encouraging. “I’ve experienced only the nicest kind of reactions,” he says. “I’ve never sensed competitiveness. It’s such a wide field and so it’s easy to specialize and not compete.” Goldstein has three large cases at the Bijou Gallery space, plus additional space in the Downtown Gallery, where the focus is on paintings, and he also maintains a curio cabinet at Once Upon A Time. 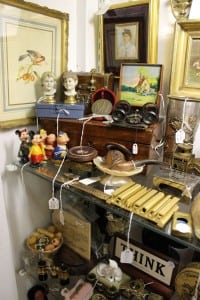 A selection from one of Jack Goldstein’s cases at Bijou Galleries, Cold Spring

It is the appreciation of “well-made things, which change over time,” which determined Goldstein’s professional focus during his many years living in the city. “I don’t, as a rule, think something old is better than something new, but we should value quality and talent in whatever way it is manifested, be it objects, buildings, wood,” he notes.

Growing up outside of Washington, D.C., Goldstein made frequent forays to New York, where his grandmother lived. Working in the historic preservation field, he moved to New York as a result of the demolition of the historic Helen Hayes and Morosco Theaters, in 1982. He was engaged to develop a strategy to prevent further demolition of historic theaters and, concurrently, to work with the city on the revitalization of the Times Square area.

It wasn’t an easy process, as he recalls: “The theater community can be fractious. Between the unions, producers, and everyone else, there are all sorts of interests and expectations. There’s an onstage need to be collaborative, but it can be combative backstage. That process involved not just landmark designation of Broadway theaters, but a development of real estate mechanisms which benefited the theaters and also made them commercially viable as buildings.”

Goldstein, who also served as executive director of the Theater Development Fund, says that the Times Square of today resulted from a “complex layering of land use regulations which allowed extremely advantageous development while at the same time creating an urban environment that people continue to see.”

Asked how this process could apply to a place like Philipstown, with its delicate balance between the need for development revenue with the maintenance of its natural character, Goldstein had much to say. 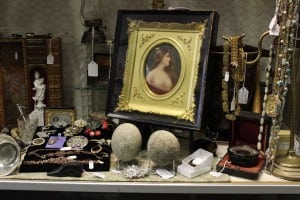 More selections from one of Goldstein’s cases.

“The degree of problems were greater in Times Square, but the same process of problem solving that I went through can be applied everywhere,” he maintains. “Consensus is very difficult. Problem solving is very different from negotiating; it is a more three-dimensional process. It’s getting all elements into some metaphorical room and rearranging them into a solution. It’s a thought process that requires the removal of ego; it’s an agreement on the process, rather than stacking the deck with like-minded people, that produces the best solutions,” he says.

Goldstein sees Main Street as “very much still a living street, which shows off very well.” He adds:

I would hate for tourism to overtake the natural quality you see in Main Street. That being said I think people dealing with their own property should be sensitive to what makes the town attractive. Look to the quality of the little things: doorknobs, colors. There’s a role for preservation, a role for zoning, but they need to be administered judiciously. Look at what the assets are: proximity to the city, proximity of the train to the town, mix of use in the town, a good school, the physical location. You want to try to channel development energy into taking advantage of those. It’s important to create long-term permanent jobs in the area. I don’t think Cold Spring should be seen primarily as a vacation spot or as a bedroom community. You need to create a population that is invested in the future of the place. There needs to be light industry geared to the assets which already exist here. Sometimes this involves taking unpopular positions. Disappointing one’s friends is very difficult, but looking at someone else’s point of view is at the basis of a healthy community … I don’t think Cold Spring needs to live in the past — it’s living and breathing now.

Goldstein says he misses “the intellectual stimulation, the being at the center of things,” of his former life. “It was rewarding to see ideas become realities, grow and prosper,” he says. “However,” he adds, “peace of mind is a very valuable thing and I treasure it. I think I’ve made a contribution when I walk through Times Square and see theaters filled — many would have been swept away. I feel ‘job done.’  But I feel here that there’s an openness to people here that has been very rewarding for me. I felt part of the place very quickly. I do find contemplation easier in the city than here, maybe because contemplation is a form of recreation in the city — I fought for those hours. Here it’s a luxurious life in terms of time, visuals, easy, being able to breathe. I’ll always enjoy both.”

Bijou Galleries are located at 50 Main St., Once Upon A Time Antiques at 101 Main St., and Downtown Gallery at 40 Main St., all in Cold Spring.