Marilyn Heberling and cast of eight serve up Check Please

Between them, Marilyn Heberling and Cathryn Fadde have said “Why not?” to a number of events taking place at their respective businesses, Art To Wear Too and Cathryn’s Tuscan Grill. Yes, Heberling has hosted fashion shows — to be expected at a clothing boutique — but so has Fadde at her restaurant. Fadde has “moved every single table outside, even in the snow” to host music events. She’s been known to change things up.

“When I first opened, employees would come in and ask ‘Where did you put the furniture?’” Fadde recalls. She’s turned the restaurant’s walls into an art gallery of sorts while Heberling has seen some of her “silly ideas” — one being the notion of a Halloween parade through town — come to fruition and then some. Now the two have joined forces to bring some “dinner theater” to Cold Spring, after Fadde replied “Why not?” to Heberling’s suggestion of same. Heberling calls both of them “trailblazers — we’ve been here [Main Street] a long time because we do try unusual things.” 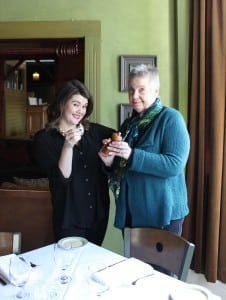 Written in the 1970s the play has been updated and runs approximately 30 minutes. Naturally, it takes place in a restaurant, and involves most of the actors — who range from 10 years old to “mature, ahem” (says Heberling) playing multiple roles. With life imitating art, Rafael Dalia, who works at Cathryn’s, will double as both stage crew (a crew of one) and server. Actors include several Garrison residents, and a contingent from Peekskill. They are: Ian Berger, Alyssa Borg, Jim Cairl, Tom Campbell, Stephanie Hare, Conor McMahon, and Brittany Spencer.

Spencer, who holds a BFA in acting, moved to Cold Spring from New York City about seven months ago, after growing up in Houston. She was cast in an informal way — she’s a friend of Borg’s, also in the show, and she thought it would be enjoyable. Spencer is hesitant to fully describe her roles, as she doesn’t want to give crucial plot elements away, and calls them simply “quirky ladies.”

Years ago, Heberling participated in some more experimental theater, outside the physical boundaries of a stage theater, performing in a Greek tragedy in a football stadium at the University of Michigan and playing a part in productions of The Glass Menagerie and The Bald Soprano which took place in a private house. “I thought that right now the world is in a bit of a weird place,” she says, “and it’s time to do something fun and different … Plus, everything old is new again. I was fortunate enough to be part of the real experimental theater — people like Julian Beck, Judith Malina. It’s coming back.”

The performance will take place in the front room of Cathryn’s Tuscan Grill.

Spencer agrees with Heberling, noting: “It’s kind of a trend on the Internet now, with flash mobs and all kinds of dance, music and theater in subway stations. Environmental theater like Sleep No More is so popular. Things which take over a space; recently there was one done in an abandoned hospital.” [Note — this is not to be interpreted as another potential use for the Butterfield property…]

The plot is simply described by Heberling: “The story of a girl and a guy and several different blind dates they go on. It’s a ‘just when you think it can’t get any worse … ’ series of situations,” she says. “I wanted to do this script because for an actor it’s some crazy stuff.”

Fadde said she is generally able to tell when a couple has come to the restaurant on a blind date, as many do. She said:

We have a lot of Internet dating. Invariably the women come in the front door [as opposed to the usual side entrance]. One or the other will sit in the bar or the lounge. Once I was talking to the fellow and then found out he thought I was his date. Another time a woman came in, saw me talking with her date, and wasn’t happy about it. Usually the people are very warm and smiling but have that little look of terror about them. They often seem very interested in each other and have long conversations which you don’t want to go over to the table and interrupt.

Spencer surmises this is because “nowadays people know so much about one another, from all the information they provide online, before they even meet each other, so there’s lots to talk about.”

Seating for the pop-up theater dinner is limited, with space for about 30, and reservations/tickets, for a 7 p.m. start, are essential. Call 845-265-5582. Cathryn’s is located at 91 Main St., Cold Spring.  For menu information visit tuscangrill.com.