Frank Costanza was right — it is just a little chicken.

The Cornish game hen (or Rock Cornish game hen) — neither particularly a hen nor game—is an intentional but common broiler chicken hybrid developed in the 1950s by Alphonsine Makowsky —“Te” to her friends — on her poultry farm in Connecticut.

She was born of a large family in a small farm town in France. “Te’s” colorful life included stints as a milliner and a chocolatier in Paris where she eventually met her future husband Jacques, an exiled Russian Jew and world-class printer. 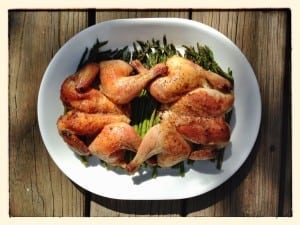 Fleeing the Nazi invasion (there’s an extended story which somehow includes the good graces of Generalísimo Francisco Franco), “Te” and Jacques ultimately landed — living in high style — in New York and on Long Island, before finally retiring in the ’40s to the 200+ acre Idle Wild Farm in Connecticut. There they settled in to profitably raise African guinea hens for the gourmet restaurant market. (You can take a jeune fille out of the country but you can’t take the country out of the jeune fille.)

But in 1949, a large fire destroyed their breedstock and in a search for a replacement “Te” began crossing Cornish game cocks with various birds — the White Plymouth Rock hen, a Mayan fighting cock — in the process developing the Rock Cornish game hen, a succulent little bird with a large, round breast and all-white meat. The birds are fully mature at about 2½ pounds and in four to six weeks as opposed to eight+ for chicken.

Fortune smiled once again on the Makowskys and by the mid-1950s, the farm was shipping upwards of 3,000 birds a day to restaurants like the 21 Club, in the process eliminating the market for guinea fowl.

Now you could just roast such a hen like this whole as you would a chicken, but a young, sweet bird such as this — just enough meat for a single serving — warrants special treatment, and not surprisingly there are a couple of simple techniques — traditional and recent — which make for a truly rara avis.*

Neither obscene nor difficult, gamebirds have traditionally been spatchcocked (or “butterflied,” or in French, the even more poetic crapaudine, or “toaded” as the final result does bear a resemblance to a rather large frog) before roasting. (Roasting is the preferred winter cooking technique but this technique is just as useful for summer grilled poultry.)

To spatchcock your bird (kind of rolls off the tongue, doesn’t it?), simply remove the backbone by cutting up one side with poultry shears (or a good heavy-duty pair of kitchen scissors) and down the other side, finally splaying the carcass and pressing it down with your palms to flatten the bird. This flattening provides for a more uniform thickness and even roasting. If you’re in the least bit insecure about the process, I suggest a quick YouTube search for video assistance.

(Prep note: Save the backbone as well as the first couple of measly wing joints which are usually removed for cosmetic reasons for stock. You can greatly improve the quality of canned broth by simmering the bones with a shallot or two, equally improving the quality of a sauce, should you be making one.)

I have Molly Stevens’ All About Roasting, an indispensible cookbook, to credit for this technique: Rinse and pat dry your butterflied hen and sprinkle at least a tablespoon of salt (heavier grained Kosher salt is best) all over the bird, above and below. This may seem like a lot but don’t skimp — the purpose of this step is to basically dry out the surface of the skin in addition to seasoning it thereby guaranteeing a tasty, crispy skin. (This is also a good time to apply a couple of heavy grinds of pepper or any other dry spice you might want to use.)

Once salted, let the seasoned bird rest uncovered in your refrigerator at least 8 and up to 24 hours. (This pre-salting and resting is also an effective technique for any traditionally roasted or grilled chicken.)

Before roasting be sure to remove the bird from the refrigerator for an hour or so to raise the temperature evenly. Brush lightly with melted butter. Again, as per Molly’s expert instructions you will be cooking at a high temperature (400˚ standard oven; 375˚ convection; 45-50 minutes for a typical hen) on a flat, open rack over a rimmed baking pan if possible. But again, this is a very forgiving recipe.

That’s about it. There are many ways to tart this simple recipe up: the aforementioned spices or a discreet sauce — but for me the simple roasted hen along with select vegetables roasted along at the same time shows off the sweetness of this common little bird to its best advantage.

*Actually both can be applied to any bird — right on up to turkeys — with stellar results.

1) Spatchcock the birds as described above. (Don’t be insecure or shy; YouTube is your friend for techniques like this.) Rinse and pat dry the butterflied hens and dry-salt with at least one tablespoon per bird. Season with pepper or selected spice to taste. Refrigerate uncovered for 8 to 24 hours.

2) To cook: remove birds from the refrigerator at least an hour before roasting to bring to room temperature. Heat oven to 400˚ (375, convection).

3) Position hens, uncrowded, on a low, flat rack placed on a rimmed baking sheet and brush with melted butter. Place on middle rack of the oven and roast for 45-50 minutes or until juice from thigh joints runs clear.