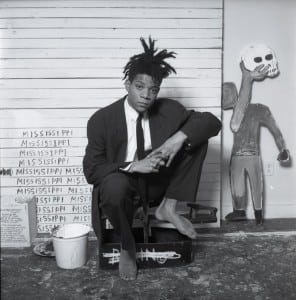 Jean-Michel Basquiat, in a photo by by Dmitri Kasterine

A photograph of Jean-Michel Basquiat by Dmitri Kasterine, a Garrison resident, is included in an exhibition entitled American Cool at the Smithsonian’s National Portrait Gallery in Washington, D.C. American Cool features 100 photographs of icons who have contributed an original artistic vision to American culture and are symbolic figures of their time.

The photograph of Basquiat is one of six of Kasterine’s photographs in the museum’s permanent collection. The exhibition opened Feb. 7 and runs through Sept. 7.

Kasterine describes the encounter with his subject:

I first saw Jean-Michel Basquiat one summer’s day in 1986 sitting on the iron steps of Dean and Deluca’s store on Prince Street in Soho. He was sitting in a way not unlike the pose he adopted in this photograph. He was eating Devonshire Cream with a spoon straight from the bottle.

I took this photograph some months later in his studio on Great Jones Street. When I arrived his assistant said, “He’s upstairs getting ready. If you wouldn’t mind waiting?” Murmuring voices and laughter, male and female drifted down the stairs and I welcomed the time to look for a background. It only took me five minutes to decide on one. I prepared my camera and sat down.

After half-an-hour I heard footsteps on the stairs and my spirits rose. It was his assistant. “Oh good, you are still here,” he said. “He won’t keep you a moment.” I thanked him and he went back upstairs and I resumed listening to the chatter. Five minutes turned into 10, then 20 and then 30. An hour passed. I was getting hungry. Then I heard footsteps again, different ones this time. Jean-Michel appeared, smiled and asked, “Where would you like me?”