The promise of restoring one of Beacon’s most treasured landmarks is the subject of Hudson Beach Glass’s current gallery exhibit. Titled Connecting Community to Nature, the show is a re-installment of Beacon Reimagined, a multi-media presentation initially organized last June at Long Dock Park’s River Center by the Mount Beacon Incline Railway Restoration Society (MBIRRS) for the city’s centennial. 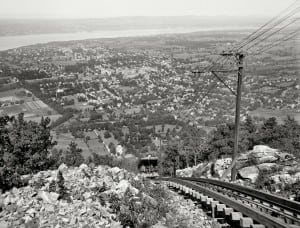 Using video, 3D animation, archival photographs, maps, historical data and architectural renderings, the society states a case for rebuilding and enhancing Beacon’s Incline Railway, a once-popular tourist attraction that ceased operations in 1978. Today, its abandoned tracks lead up to the 1,540-foot summit of Mount Beacon, where hikers can find what is considered the best view of the city and the entire Hudson Highlands.

The exhibit opened last Saturday with a three-part presentation by representatives from MBIRRS, Beacon Greenway Trails and Scenic Hudson.

Jeff McHugh, Vice President and Trustee of the MBIRRS, updated guests on their plans for an ambitious $20 million capital campaign. To date, the society has raised $250,000 through standard fundraising efforts, most of it in the last five years. Late last year, Scenic Hudson donated Mount Beacon Park to the New York State Office of Parks, Recreation and Historic Preservation as part of a larger 1,250-acre land acquisition deal. In turn, the society received a $100,000 grant.

“This latest grant makes it possible for us to create our business and operational plan as well as complete Phase II of our capital campaign plan, with some additional funds from the grant to further develop the overall design and architecture of the facilities,” said McHugh.

MBIRRS, which was founded in 1996, accelerated its growth in 2009 by establishing a board of advisors, appointing Mike Colarusso as CEO and president, and forming professional partnerships with conservation organizations including Scenic Hudson and the National Trust for Historic Preservation. The $20 million is for design and construction, organizational funds (programming, marketing, staff), an initial operating endowment, and contingency funds.

“While one contractor optimistically estimated that, once the site was shovel-ready, construction would take approximately 18 months,” said McHugh, “we believe the entire project is potentially possible in a four to six-year timeframe. Of course this is all dependent on continued interest and support from the community, county and state, which we are happy to see is gaining momentum.”

The society’s concept for restoring the Incline Railway, which was built in 1901, includes a visitor’s center in the lower park and the Excelsior, a 6,000-sqare-foot  LEED-certified summit center comprised of a station landing, an indoor/outdoor observation space, and a restaurant, all built into the mountain as fluidly as possible. Two new 45-passenger, wheelchair accessible cars (the funicular), will be heated and cooled for year-round transport during daylight hours. Remnants from the old facility, the brick anchorage and cement foundation of the old resort, will be preserved in glass encasement. LAN Associates of Goshen, N.Y., are the architects and engineers.

When completed, the new Railway Incline promises access for people with disabilities to Mount Beacon and its views, as well as 480 new jobs generated by tourism, but it will also increase foot and possible car traffic by approximately 192,000 visitors annually.

“The entire project is anchored in the principal of preserving and appreciating nature. As such this will inform all of our designs, operational plans, marketing and related functions,” explained McHugh, who noted that “$100,000 is earmarked for addressing this specific concern, with mass transit and pedestrian modes of transport at the forefront.

“Having a non-profit business with a vested interest in the mountain makes it possible to actually keep the mountain cleaner than it is now. Within its daily operation, we will have trash receptacles and service, signage, monitoring, and frequent volunteer ‘cleaning hikes’ that can be properly equipped, supported, and coordinated.”

The summit will continue to serve as the head for private and public hiking trails. Jim Korn, Chairman of Fishkill Creek Greenway Heritage Trail, presented the city’s plan for a new trail that will connect Fishkill Creek to the Hudson River via the city’s urban center. A digital version of this map is featured in a kiosk at the exhibit. Mark Wildonger, a Senior Planner for Scenic Hudson, provided an update on the Hudson Highland Fjord Trail, a new nine-mile multi-use trail linking Cold Spring’s and Beacon’s train stations.